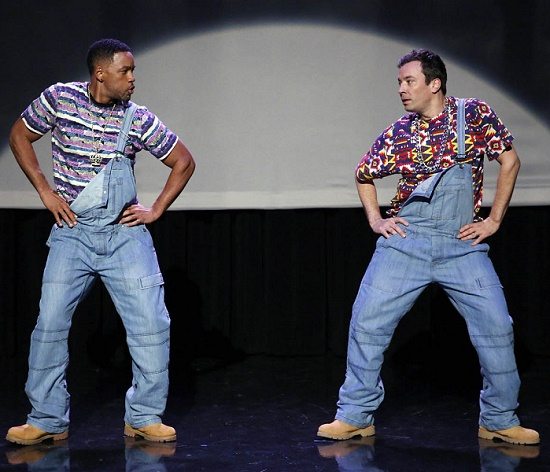 After a few years putting in dues at Late Night, last night Jimmy Fallon and The Roots got a major upgrade when they took over the reigns of the legendary The Tonight Show franchise from Jay Leno. Though a host of familiar faces were on hand to welcome the host into the elite Tonight Show club, the host's official first guests were hip hop legend Will Smith and rockers with a cause U2. While the night contained many memorable moments, perhaps the best came during "The Evolution of Hip Hop Dancing" skit, where Will and Jimmy did their best interpretations of the many dances that spawned from hip hop culture. While the fellas held their own for most of the skit, pulling out classics like The Cabbage Patch, The Running Man, The Wop and The Carlton, things kinda fell apart at the end when Jimmy attempted to twerk (or whatever the hell he was doing). One thing's for certain, though, Jimmy and The Roots crew rocked their opening night of their new gig and we'll definitely be staying up late to watch. In case you missed it, check out "The Evolution of Hip Hop Dancing" right here and be sure to tune into The Tonight Show Starring Jimmy Fallon as it's sure to be must-see TV.


TAGS:  jay leno", jimmy fallon", the roots, u2, will smith
Previous: We Are ‘Drunk In Love’ With Full Crate’s Beyoncé Remix Next: Kelis Prepares For Her Return With ‘Jerk Ribs’