Kanye West Goes From ‘Dropout’ To ‘Yeezus’ On ‘Late Night’ 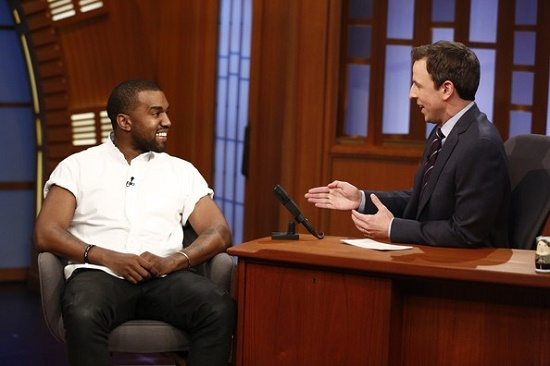 With Jimmy Fallon moving to the higher profile Tonight Show, his fellow Saturday Night Live alum Seth Meyers has taken over the reins of Late Night. So it's a coup for him that he managed to line up none other than Kanye West as one of his first musical guests on the show. Yeezy sat down on Seth's  chair and put on his "proper" voice that he's adapted for mainstream audiences to discuss his music, fatherhood, fashion and recently wrapped Yeezus Tour. In addition to an entertainingly awkward interview, Kanye took the audience on an unexpected trip down memory lane during his performance with a career-spanning medley that featured Yeezy classics like "Jesus Walks," "Touch the Sky," "Mercy" and, of course, his most recent hit "Black Skinheads." For those that might've been put off by Kanye's recent antics or the angry direction he took on Yeezus, this might remind you of why we've come to love (and sometimes loathe) the unpredictable Chi-Town MC.