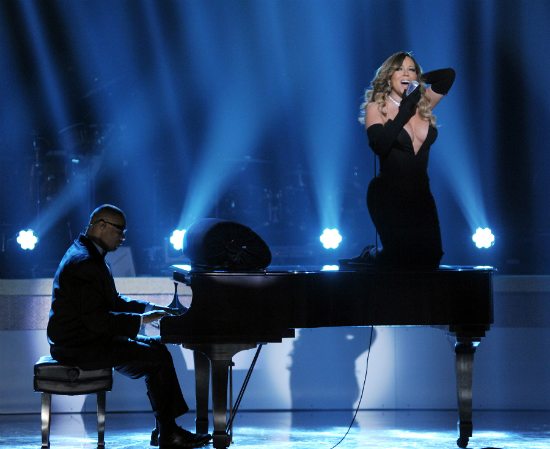 Mariah Carey was the talk of the BET Honors taping this past weekend not just for her eye-popping evening gown selection but because she opened the show with the first public performance of her new single "You're Mine (Eternal)." Thankfully we won't have to wait until the special's February 24th air date to hear it because Mimi has revealed the song to her adoring public today. "You're Mine (Eternal)" finds Mariah in her slow jam comfort zone with a song that sounds like a younger sibling to "We Belong Together." But when comparing the two tracks, "You're Mine (Eternal)" is the Ray J to Brandy's "We Belong Together." In other words, it tries but just doesn't measure up.

"You're Mine (Eternal)" is an admirable effort, and after repeated listens one may even grow to love it, but on first blush the Rodney "Darkchild" Jerkins production leaves more to be desired when held up against better songs from her own catalog. Equally as so-so and not def is the remix, which employs Trey Songz and good bit of Auto-Tune to make him feel at home. They could have kept that to themselves and acted like the remix never happened, which is what I think I'll do. Will "You're Mine (Eternal)" restore Mimi's career to the greatness of yesteryear and and bring her chart dominance once again? My Magic 8 Ball says "Not Likely," but I'm optimistic that where there's smoke there's fire and Mariah holds all the matches.


TAGS:  "rodney jerkins", audio, brandy, mariah carey, ray j", trey songz
Previous: Ashanti’s ‘Got It,’ But Do We Want It? Next: Expect ‘The Unexpected’ On Liv Warfield’s New LP