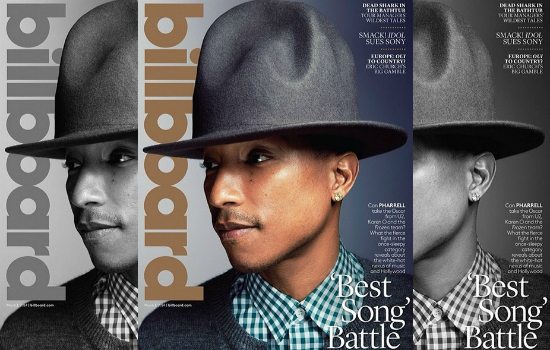 Pharrell Williams, fresh off a rousing performance at this year's BRIT Awards, has kept his name on the tips of everyone's tongues for the better part of a year, and he'll continue to do so next month during the Oscars and with the release of his new album, G I R L. The artist/producer continues his reign in the public consciousness as the latest cover boy for Billboard's new issue. Rocking a grey version of the now-infamous Vivienne Westwood hat he first wore at this year's GRAMMY Awards on the cover (if you'd like to own it, Pharrell is currently auctioning it off on eBay). But Pharrell isn't content with just making an appearance on the industry bible.

Williams has also revealed the songs and guest artists that will appear on G I R L. Justin Timberlake, Alicia Keys, Miley Cyrus and Daft Punk will all be along for the ride on the 11-song set, while it appears Skateboard P will be flying solo for the remainder of the album. Based on the responses that have come from the listening sessions that he recently held, G I R L will be yet another feather in the producer and musician extraordinaire's rather large hat. We'll next see Pharrell take the stage at this year's Oscars. Until then, peep G I R L's tracklist and prepare yourselves for his continued reign.