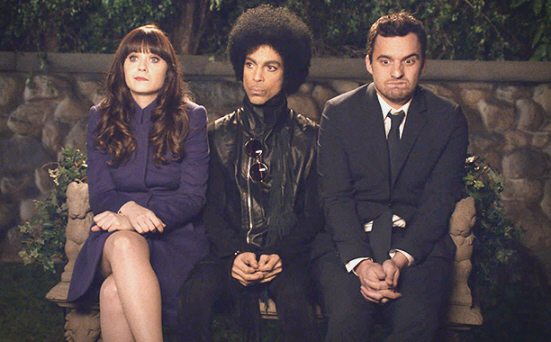 I know a little something called the Super Bowl happened yesterday, but I'mma let the Seahawks and Broncos finish because Prince made a guest appearance on FOX's New Girl last night and it was nothing short of amazing. After it was revealed that Prince was a huge fan of the show and had signed up to star in an episode, it seemed quite unreal, but his Royal Badness slipped right into the awkwardness and shenanigans of  the cast and his appearance made for one of the funniest episodes this season. If you follow New Girl you know that this third season has been kind of a bummer lately, even with the get-together of lead characters Jess (Zooey Deschanel) and Nick (Jake Johnson) and the reappearance of former roomie, Coach (Damon Wayans, Jr.). Well, you can call it the magic that is Prince, but things just fell into place and the chuckles were aplenty, with the episode centered around Jess and Nick as they take their relationship to the next level by naturally struggling to say those three magic words. No, not "Let's Go Crazy," more like, "I love you." The word choke gets interrupted, though, when in an off-chance Jess and CeCe (Hannah Simone) are invited to the Prince mansion (we're suspending belief here, folks) and in an attempt to get things on the same page, Nick goes on a crusade with the rest of the roommates -- Coach, Winston (Lamorne Morris), and Schmidt (Max Greenfield) -- to confront his fear with them all winding up at the mansion. Prince plays Prince, and his being able to poke fun at himself is one of the things I find most endearing about him, and like the whisper soft soothsayer that he is, he swoops in to save the day and he offers Jess pancakes (!), a Paisley Park approved makeover, some weird dark closet therapy, and most rewarding, some simple n' sweet sage advice:

Having Prince on an episode that grapples with saying the words "I love you"  is quite clever, considering that Prince is never one to shy away from saying it no matter if he's being coy or outright raunchy. For that it's a sweet victory by show's end, when the "I love you's" are tossed mutually around and Jess and the gang join Prince on stage to debut his newest song, "PretzelBodyLogic." Just like the cast we are left wondering at the end, how do we go to work and live our lives the next day after being blessed by the Purple One? Where do we go from here? So many questions, but one thing is still certain, Prince IS magic and we are just so fortunate to bear witness to it daily.