Toni Braxton & Babyface Give It A ‘Go’ On ‘Good Morning America’ 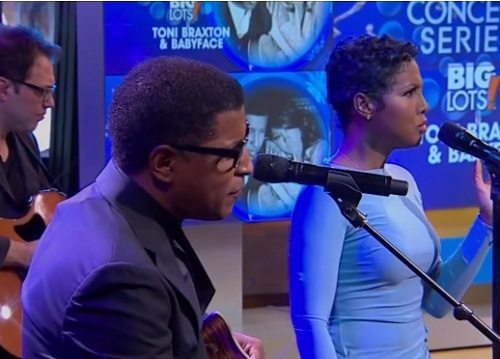 With the arrival of Love, Marriage & Divorce this week, Toni Braxton and Babyface are making the usual promo rounds in support of their first full-length collaborative effort. Those rounds included a stop at Good Morning America, where the two chatted with host Robin Roberts about the project, its inspiration and their upcoming stint on Broadway in the crowd-pleasing After Midnight. While the interview was much less invasive than when they sat in with The Breakfast Club earlier in the week, it still yielded a good deal of info about what went in to the album. But, most importantly, they also gave the audience the first television performance of their ballad "Where Did We Go Wrong." Sounding pitch-perfect, the duo brought exquisite heartbreak to the GMA set as their voices soared on the stage. Check out Toni and Babyface doing what they do best right now, and be sure to grab Love, Marriage & Divorce, which is in stores now.