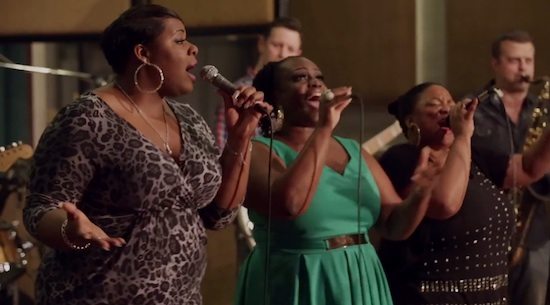 LaSharVu is the collective name for three of Britain's finest vocalists who you have undoubtedly heard numerous times, even if you hadn't quite realized it. With a combined resume that reads like a who's who of both British and international music, Vula Malinga, Sharlene Hector and LaDonna Harley-Peters are the real deal. The talented trio recently got together with other members of Natalie Williams' Soul Family (a collective who play together monthly at London's legendary Ronnie Scott's Jazz Club) to perform a cover of Beyoncé's "Party" and, in a word, they slayed it. The ladies take it to church and back again with some stunning harmonies and individual vocals that easily top 99% of what "popular" music has to offer. Recently the trio have been in the studio recording alongside Tawiah for her hotly anticipated debut album, and only last night Vula took to the stage with the Robert Glasper Experiment alongside Emeli Sandé, Raheem DeVaughn and Laura Mvula for the first leg of their European tour at London's Hammersmith Apollo. Seriously, these three need to release an album together.