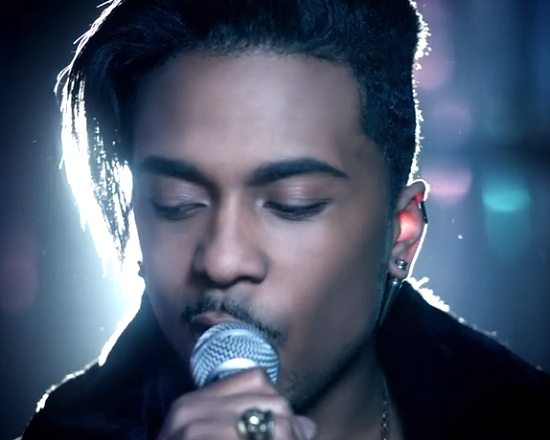 SB: The video is very sci-fi and futuristic and has a cinematic quality to it. What inspired that?

KK: I’ve always been obsessed with sci-fi and futuristic visuals. I’m a superfan of The Fifth Element and I also did my research on this amazing movie called Blade Runner. I’m a fan of sci-fi stuff and superhero stuff — I’m a geek on the inside. So, I wanted to present myself in that way, something fanciful. I wanted it to look and sound as if Billy Dee Williams was in Blade Runner instead of Harrison Ford. [laughs] We had to bring that to life on the visual.

SB: The video ends with “To Be Continued…,” so can we expect more of the story?

KK: There’s a whole storyline, so you have to stay tuned. There are some twists and turns with the whole concept. It all takes place in this post-apocalyptic, uptown-meets-downtown, dark, futuristic city. So stay tuned. It’s gonna be good.

KK: I wrote the treatment and kind of wrote all the characters, so it’s kind of my passion project. This is my brainchild. It was great having it come to life.

KK: I’m inspired by film directors and movies, but yeah, it’s me. I’m coming up with the concepts and I wanna have my hands in everything artistically. Not because I can do it, but because I feel like right now more than ever, artistry needs to be presented and I wanna be true to that. I’m a true artist, so I want to be able to present visuals and music and eventually bring my own artists out.

SB: I’ve mentioned who you’ve been compared to, but who are your own influences?

KK: I’m obsessed with Rick James. I think he was just charming and vulgar and honest and I like to reflect on real life. I’m a super David Bowie fan, so that’s definitely there. Obviously Prince is a genius. I think Missy Elliott is great. She’s always been forward and she plays with goofy concepts and makes them into commercially successful records. As well, Tupac. I think Tupac was honest, blatant and full of himself. So, you know, I’m influenced by a lot of different artists.

SB: Speaking of Prince, many would say your look is Prince-esque. Does he inspire your style?

KK: That’s funny. No, it just happened. I’ve always experimented with haircuts. My barbers in the past and my current barber always have a hard time with me. I just feel like with artistry it’s all about influence, I think if someone can present you and people recognize that, it’s an important attribute to have as an artist. I think it just naturally came, it was something that was memorable. I’ve been told that I look like Prince by a lot of people, complete strangers. It’s flattering, but I didn’t go and say, “I wanna look like Prince.” [laughs] But it just happened that way, I guess.

SB: Audio Justice is the first taste were getting from you, but you mentioned that you have an album coming up soon. Can you tell us what to expect?

KK: True music, true emotion and progressive instrumentation and melodies. I’m giving my heart and my all to this, so expect my all and just great music, quality music. Audio justice. I’m trying to bring justice to the radio.

SB: Do you have a title for the album?

KK: Not yet. When we group all the records together, we’ll come up with an overall thing. I plan on making all my records match, so I want to hear everything together and when we come to an agreeance with the team, we can start thinking about titles. But, as of now, there’s no title.

SB: Outside of Audio Justice and "Gimme Your Love," which is available on iTunes, are there any other venues where we can find you?

KK: We’re setting up some performances now. I’m gonna be doing SXSW, so I’m excited about that. My band is killer, a bunch of awesome musicians. I can’t wait to present the music in that way.

SB: Any other words for your current or potential fans?

KK: Just stay tuned. I’m really excited. It’s gonna be a real well-rounded experience, from the visuals to the costume design in the mini-movie and the music videos. And the music takes you on a ride. If you see me in my yellow sportscar riding around you might hear me playing the album. I’m so excited and can’t stop playing it. I’m really excited to give this to you guys.

SB: We’re definitely looking forward to it and we’ll be on the lookout for you and your yellow sportscar.