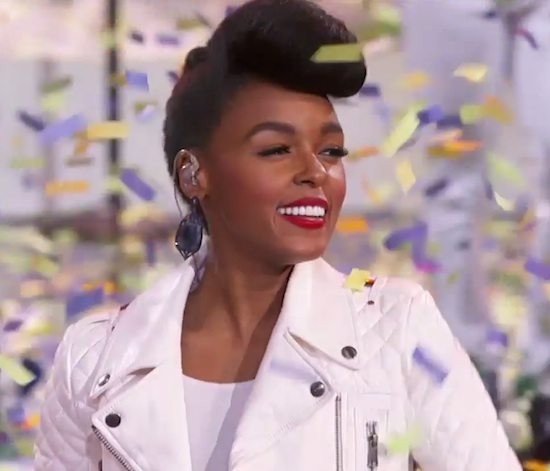 Time and time again, Janelle Monáe has proven to be an electric performer. Her appearance on Thursday’s American Idol results show was no exception — but most definitely exceptional!

Promoting her latest, “What Is Love,” a song that appears on the soundtrack to the animated film Rio 2, Janelle belted out the kid-friendly love song, never missing a note. The touching tune that’s sang by animated birds in the flick got the human touch with Ms. Monáe’s entourage of dancers and surdo drummers, all donning zebra-striped shirts matched with white shorts or pants. Though heavily influenced by the beats of Brazil, Janelle’s brand of funk appropriately fit its way into the fiesta, with a nice breakdown toward the middle of the showcase.

Samba dancers, banner waving and a confetti-filled climax at the conclusion had the audience on its feet — which surely would have been the case whether or not the show’s producers encouraged it.

But we digress, as this is one intercultural exhibition worthy of praise, and has us hyped for the festivities circling around Brazil’s upcoming hosting of the World Cup (this year) and the Olympics (in 2016). But until then, we’ll have the Electric Lady’s TV soiree on repeat.


TAGS:  american idol", janelle monae, Rio 2
Previous: Morning Soul: I’ll Be Your Teacher, I’ll Show You The Ropes Next: Sevyn Streeter Is On To The ‘nEXt’ With Kid Ink