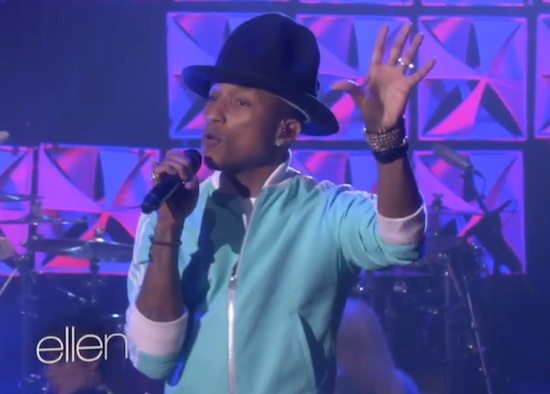 Just when you think you can't take yet another performance of Pharrell Williams' gift that keeps on giving that is his hit song "Happy," another one happens and you watch and you deal. Because how can you be mad at "Happy"? Exactly. You can't. So when P decided to swing by The Ellen DeGeneres Show today to perform the number one song in the country for a few weeks running for the third time on national television this week laone, admit it, you were probably in front of the TV set singing along and dancing with reckless abandon. Don't act like I was the only one.

The "Happy" times didn't end there, when host Ellen DeGeneres and Pharrell surprised show choir at the Detroit Academy of Arts and Sciences. The youngsters had performed the song on a video that went viral and caught Ellen's attention. Always one to pay it forward, Ellen and sponsor Shutterfly hooked the choir up with $50,000 to fund a trip for the kids to perform at Disney World. Excitement and elation followed in Detroit, while back in Los Angeles Pharrell and Ellen sat down for a fun interview.

After Ellen gushed about her love for him and how kind he is, they talked about his new album G I R L. Pharrell expounded on his concept and love for women (which begs the question why didn't he name the album W O M A N, but I'll let him cook). Of course, the subject of his now-signature vintage Vivienne Westwood hat came up, and, always the jokester, Ellen presented him with an even taller hat and hilarity ensued. Her slick jokes at the end of the interview segment about Pharrell holding the hat in his lap were golden. To wrap up his Ellen stint, Pharrell performed his new single "Marilyn Monroe," and this showing was much more lively -- and live -- than what went down on Saturday Night Live last weekend. The band and dancers really set it off. This wasn't a favorite from G I R L when I first heard, but it's grown on me. "Marilyn Monroe" might have "song of the summer" potential.

The next stop for the Pharrell party bus will be on OWN Sunday night for an interview with Oprah Winfrey on Oprah Prime. Who knows where else P will pop up next week, but I'll probably be watching.