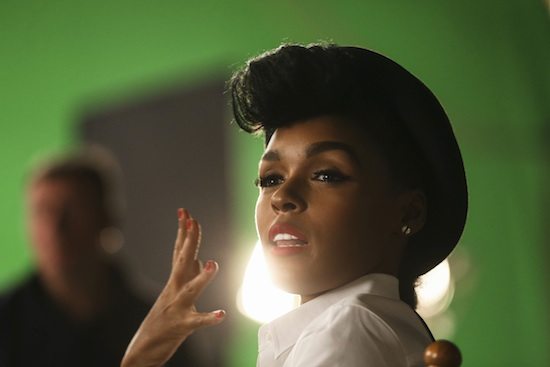 Janelle Monáe is proving to be not only a favorite of soul music lovers but hot commodity on Madison Avenue as well. On the eve of something big to come from Ms. Monáe and M.I.A. for the car maker Audi, the petite powerhouse unveils a new song for another major ad campaign for global soft drink brand Pepsi.

This new track isn't just any old song, but it is a remake of David Bowie's "Heroes, " taken from his 1977 album of the same name.  No stranger to a good cover, our favorite android Janelle's (yes, her name is a verb now) it once again. Janelle adds a splash of soul to "Heroes" with Wondaland Art Society's stamp all over the updated groove.

"Heroes" is for sale on iTunes and Google Play and is being used to promote Pepsi's “Now Is What You Make It” global futbol (or football or soccer depending where in the world you're from) campaign that includes a new commercial and interactive film co-starring Monáe. The CoverGirl spokeswoman has a brief cameo as a street performer in Rio de Janeiro, Brazil in the two-minute ad that was also unveiled today and features and all-star lineup of international footballers.

To say that Janelle profile has been raised on a worldwide scale is an understatement. Monáe is making major moves and continuing to break barriers with her brand.