Pharrell Gets ‘Happy’ With ‘Marilyn Monroe’ On ‘Saturday Night Live’ 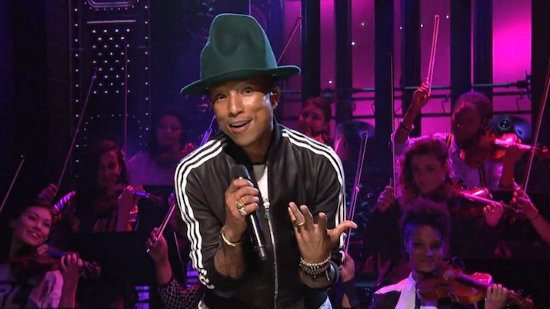 Not many people can imagine closing out their birthday with a highly-anticipated performance on Saturday Night Live. But then again, Pharrell Williams is certainly not just anybody. After kicking off his 41st birthday with a Sponge Bob-themed party at Bikini Bottom at New York City's Cipriani on Friday night, he rounded out the big event as the musical guest on SNL the next day.

During his first performance, Skateboard P took to the stage to perform his chart-topping hit, "Happy." Flanked by two backup singers, Pharrell was joined on stage by a group of young dancers. I'm not sure if it was just me or the fact that I'm about five seconds from being all "Happy"-ed out, but the performance lacked the infectious energy that has punctuated his previous live performances of the show. Pharrell also seemed to be either lip-syncing or singing over a vocal track. Not known for having the strongest voice, it seemed unlikely that his voice could be so loud and clear with the mic being held as low as it was. Even still, resistance proved futile as I found myself singing along by the performance's end.

For his second outing, Pharrell was joined on stage by a string orchestra (led by famed composer Hans Zimmer) for a performance of "Marilyn Monroe." While I think a performance of "Gust of Wind" would have provided a better showcase for the strings, it still was an upbeat way to cap off his solo outing on the long-running SNL. The second time around, there definitely was some lip-syncing involved, especially on the part of the backup singers since it was clearly Pharrell's vocals they were "singing" to. The minute technicalities aside, both performances were still pretty enjoyable, thanks in part to his gift of crafting fun and catchy tunes. After enjoying a triumphant 2013 thanks to striking production gold with everything ranging from Daft Punk's "Get Lucky" and Robin Thicke's "Blurred Lines," I'd definitely say that Pharrell's 41st year got off to a grand start.