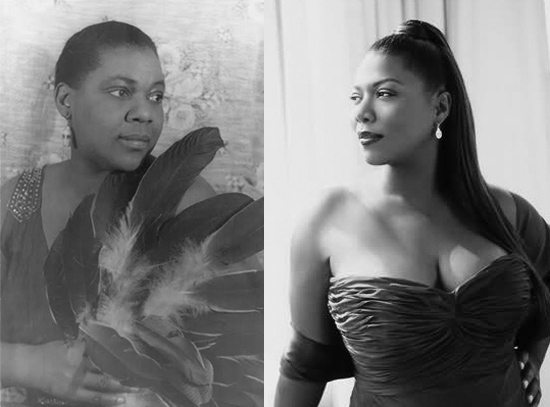 I'm all for Beyoncé bringing up a basic feminism conversation to those who were not informed, but ever since this chatter has happened, it seemed to me like the last 80 years of empowering music by Black women has gone under rug swept. So I breathe a sigh of relief that one influential voice will finally get their chance to sing out and prove that Black women have never been tame when it came to the act of independence through song. For awhile now Queen Latifah has wanted to bring the life story of jazz and blues legend Bessie Smith to the big or small screen, and it looks like things are finally getting off on the right foot. Under the title of Blue Goose Hollow (the area around Chattanooga, Tennessee where Smith was born and raised), the film is still in its development stage, but director-writer Dee Rees (who drew well-deserved attention for the 2011 flick Pariah) has been tapped to bring the flick to HBO with Queen, who has been nothing short of busy what with her high-rated daytime talk show and various production projects, in the starring role. The project, which is backed by Latifah's Flavor Unit Entertainment company, has an eye on a mid-June 2014 production start date in Atlanta, Georgia.

For a little background, Bessie Smith rose to fame during the Roaring 1920s after successes in vaudeville and touring minstrel shows. Popular for her social butterfly persona, brash attitude (seriously, read about her party girl ways and her bold act of scaring off the Klu Klux Klan at one of her shows), Smith put a female spin on the mostly male-dominated jazz and blues narrative with such hits and notable covers as "Down-Hearted Blues," "Gulf Coast Blues" and "T'ain't Nobody's Biz-Ness If I Do," and by the end of the 1920s she had recorded over 200 songs and became one of the few Black superstars of her era. Later on bouts alcoholism and the blow of the Great Depression led her career into a decline, still it's great that finally her legacy will live on in this upcoming flick. Us here at SBHQ have no qualms over Queen Latifah wrapping herself up in Bessie's boa to bring the empress of blues' story to a new generation, and we're also impressed that it's being noted that Blue Goose Hollow will get some facts straight about Smith's boisterous life, especially clearing up such myths surrounding her tragic passing in 1937. We'll keep you up to date on Latifah, Rees, and their Blue Goose Hollow project once we learn more about the release in the coming months.