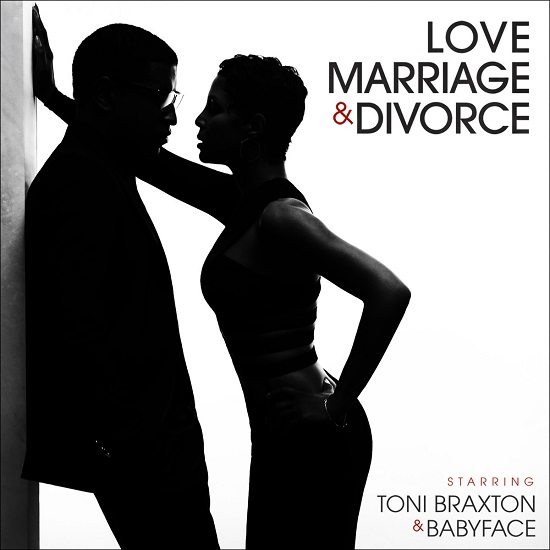 Call me old school, old fashioned or just plain old, but I like my Babyface Cool and my Toni Braxton self-titled or laced with Secrets. After nearly two decades of hit-or-miss offerings from the R&B balladeers, I anticipated their collaboration Love, Marriage & Divorce with a sense of excitement, but also with caution. Could the two, who had made such timeless music during their respective peaks in the ’90s, be capable of capturing that magic in this decade?

Early on, the answer seemed to be yes. Set-starter “Roller Coaster” is a smooth entry into the collection. The mid-tempo melody cozies up to Kenny and Toni’s lyrical back-and-forths that are packed full of blame-throwing and sticking-togetherness. At once heated and chillingly cold, “Roller Coaster” is all serious, but “Sweat” is playful, successfully channeling the aggression and rage of a fight into the motivation for bedroom-oriented recreation.

Definitely ready for the dance floor is “Heart Attack,” a funk-infused number that will get toes tapping. Babyface’s muffled verses are set off by the sharp vocals Toni has honed recording dance mixes of some of her biggest hits, and the pairing takes the tune into retro territory while keeping in step with the modern crop of disco-styled tracks.

“Reunited” isn’t a cover of the Peaches & Herb classic. Instead, the straight R&B jam showcases the impassioned vocals from the duo, which are full of hope, emphasizing the goodness of love and their eagerness to get back to it. On the other end of the spectrum, things prove strained during “Hurt You,” as the pair belts the woeful, “God knows I never meant to hurt you/ I never meant to break your heart,” and plea for some sort of resolution to their shared pain.

Even though Love, Marriage & Divorce is a team project, both artists step away for spotlight-stealing solos. Toni’s come in the form of “I’d Rather Be Broke” — the “independent woman” inclusion on the album — and the subdued “I Wish,” in which she lists out ways she wants her ex to suffer after breaking her heart. Kenny Edmonds, on the other hand, gently hopes his past love is alright, surviving and making it through on “I Hope That You’re Okay.”

Though inspiration for the music on Love, Marriage & Divorce may come from Toni and Babyface’s broken marriages, it more than makes up for some of the musical missteps over recent years. The album brings back those feelings you might have felt listening to For the Cool in You, Toni Braxton or Secrets. It’s the type of soul music that visits every emotion one experiences in matters of the heart — from the deepest depths to the most romantic highs —  that a listener can come away from with feeling good. The “if it ain’t broke, don’t fix it” approach took the album “back to the good stuff” (see “Reunited"), which worked well and for which we get to reap the rewards.