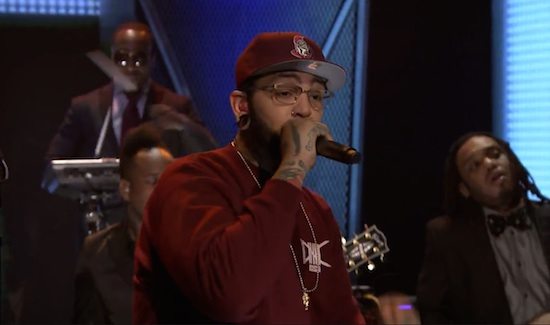 Travie McCoy continues his career without the help of former bandmates Gym Class Heroes and has released a new single, “Keep On Keeping On.” The track -- dedicated to the hardworking, those who persevere and those who rise above life’s given obstacles to achieve fame, fortune and/or happiness -- is full of anthemic qualities and is sure to find itself on motivational mixtapes.

For his first performance of the song, Travie stopped by The Tonight Show Starring Jimmy Fallon to give a hand-clapping, feel-good take on his aspirational rhymes. Perhaps the best addition to the song was McCoy being backed by Fallon’s house band and SoulBounce favorites The Roots, who rocked right along with the happy rap tune. Stepping out of the shadows was “Captain” Kirk Douglas, who captured the same emotional delivery as Panic! At the Disco’s Brendon Urie, who belts the chorus on wax but likely doesn’t pull out a guitar-god solo after the verse. Though Travie finds himself without a band these days, his collaboration with The Roots is one for the history books.