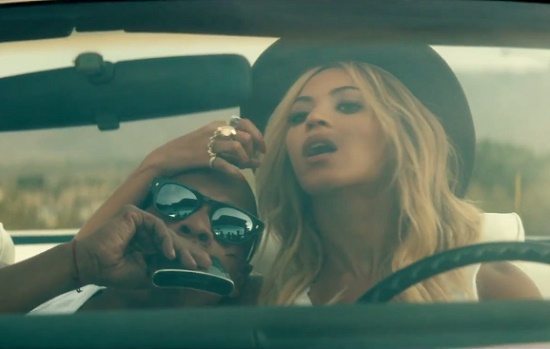 It's the Beyoncé and Jay Z video that everyone is talking about (that doesn't involve Solange going all Chun Li in an elevator). Instead of doing a run of the mill trailer for their tour, the couple rounded up some famous friends, like Academy Award winner Sean Penn, Scandal's Guillermo Diaz, Don Cheadle, Kidada Jones, Rashida Jones and Emmy Rossum, to make a trailer for a movie that's never coming out. The Knowles-Carters reprise their "03 Bonnie & Clyde" personas (which they picked up again for Jay's track "On the Run") as they go on a crime spree across the country. Though we don't get a sense of what exactly the plot of this fictional movie would be, we do see Jay playing up his gangsta persona in strip clubs and hotel rooms and Bey getting a talking to by a concerned Blake Lively. Still, based on the star power and action that's shown, we wouldn't be mad if this became an actual film. Check out the Knowles-Carters getting cinematic with it and make sure you grab your tickets for their On The Run jaunt, which kicks off next month.