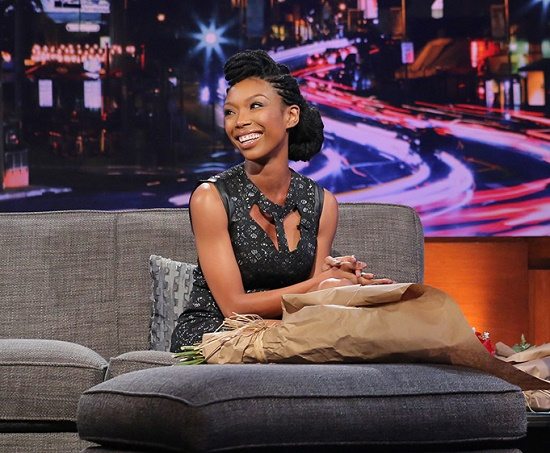 Brandy's big comeback album, 2012's Two Eleven, didn't exactly live up to expectations, despite it housing some of her best material in years (to be fair, though, really good songs were surrounded by some not-so good ones, so there's that). Thankfully, that hasn't deterred the former pop/R&B teen queen from getting back in the studio. While stopping by The Arsenio Hall Show for a special Mother's Day edition of the program, B-Rocka chatted a bit with Arsenio Hall about where she is in her life and why that's a good thing for her music. She also assures us of one thing, she's officially done with her rap alter ego Bran Nu (let the church say Amen). Brandy will be hitting the studio this summer to begin work on the project, which means we could probably expect the album to arrive sometime early next year.

New music isn't the only thing Brandy discussed on the show, though, as she was there to celebrate her mother, Sonja Norwood. Her and her mommy discussed and celebrated each other as Arsenio looked on, occasionally interjecting a question or two into the mix. Peep Brandy talking about her music, mommy and more in these two clips and keep an ear out for what she's got in store in the coming months.


TAGS:  arsenio hall, Bran-Nu, brandy, sonja norwood, The Arsenio Hall Show
Previous: Morning Soul: What You Say To Me Is Just Paper Thin Next: Immerse Yourself In Fatima’s ‘Yellow Memories’