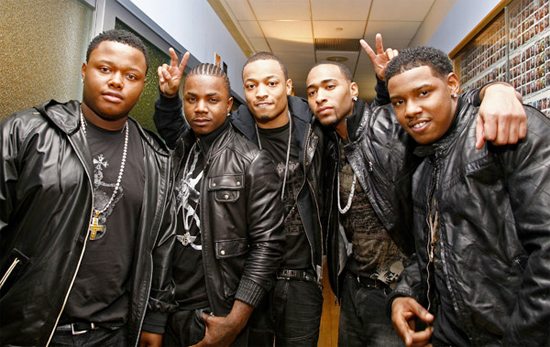 Danity Kane aren't the only Making the Band alums staging a comeback in 2014. Their male counterparts Day26 announced their reunion last year, and they're making good on the promise with the release of their new single, "Bulls#!t." As you can imagine, there are all types of shenanigans afoot as the fellas trade verses and sing about a woman whose attitude stays on the side-eye setting. She doesn't trust that her man is doing her right and is convinced that he's running the streets, cavorting with random chicks and basically on some "Bulls#!t." The Day26 dudes individually and collectively plead their case to no avail.

For what it is, it's a catchy, urban radio-friendly song about a topic that many ladies and gents can relate to. What it isn't is anything too deep with pretty basic lyrics and run-of-the-mill, modern-day R&B male vocals. Nonetheless, this "Bulls#!t" might be a good look for Robert Curry, Brian Andrews, Willie Taylor, Qwanell "Q" Mosley and Michael McCluney as they try to regain their footing.  Listen to the clean and dirty versions of the track depending on what you're in the mood for right here. For those fans hungry for more, they'll get it when Day26 drops their EP, The Return, on June 26th.