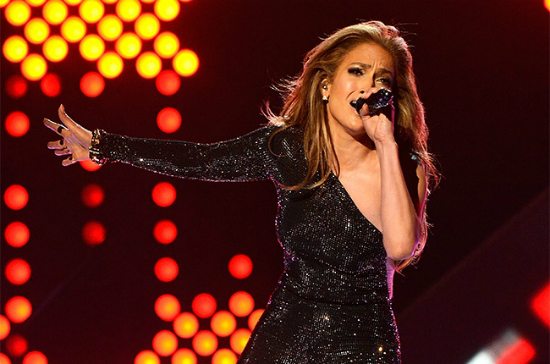 While Janet Jackson, Mariah Carey and Beyoncé were at home like the rest of us trying to figure out how Jennifer Lopez got a Billboard Icon Award before any of them, the Latina spitfire opened and closed the 2014 Billboard Music Awards. She kicked the night's festivities off with Pitbull with a performance of the FIFA World Cup Song “We Are One (Ole Ola).” That was an international spectacle, but for her closing act, JLo went solo and a little more subdued for a performance of her current single "First Love."

Introduced to tons pf praise by Ricky Martin and Iggy Azalea and a recorded love fest from a few of her peers including Rihanna and Mary J. Blige, Jennifer took to the stage looking like a bag of flawless black diamonds rocking a shimmery black and gold outfit with a floor-length skirt. She soon lost the skirt, revealing a one-armed body suit hugging her figure. The performance was good, with Jenny from the block exhibiting her dance skill that distracted viewers from her singing, which may or may not have been live. Her live vocals were debatable, but one thing is for sure JLo's bad chick status was definitely at level 10 last night.