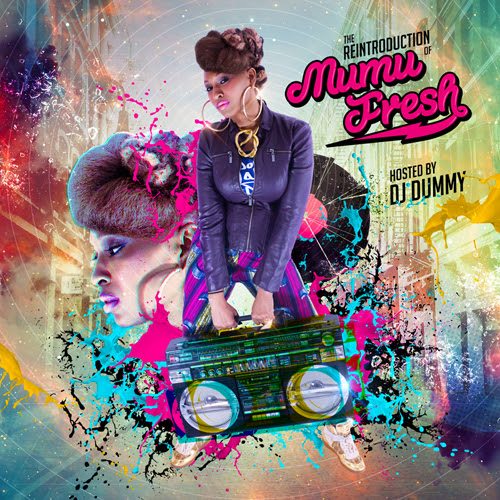 There's nothing more refreshing than listening to a positive emcee. Even more refreshing is when such an emcee can sport an intricate afro, some fly kicks and a bright smile that can melt the hearts of any artist, including the ones she battles. We caught up with songstress and rapper Maimouna Youssef aka Mumu Fresh at the DC Love Festival last weekend, an annual event that celebrates the diverse culture of the District of Columbia. Featuring artists Chrisette Michele and Talib Kweli, Youssef served as the gracious host, keeping the crowd engaged with her comedic banter and soothing voice. On the verge of releasing her new mixtape, The Reintroduction of Mumu Fresh, which came out yesterday, we asked the femcee what we could expect.

"You can definitely expect a good time, a lot of fun and some silliness. A lot of the songs are my own perspective on social woes or circumstances with comedic relief added to it. So you can laugh and cry with it," she said. “A lot of people who watched the 'We're Already Royal' video like called me crying like 'Oh my God!' you know, and a good cry of just feeling proud because a lot of times the image people get around the world of African-Americans is not one to be proud of. So just re-instilling that pride in who we are and what we have accomplished and what we can accomplish."

For lack of a better word, the mixtape itself is fresh. Taking today's hits and recreating them into social commentary is exactly what Youssef did, and there are definitely some relatable, funny tracks. Who knew Beyoncé's "Drunk in Love" could morph into an ode to food in Youssef's "Crunch 'n' Grub," and Pharrell's "Happy" be reimagined into "Nappy" about natural hair? Youssef even takes Rihanna's “Throw It Up” and crafts a song about those pesky student loans, singing in the chorus "defer my loans for at least two years, ain't got your money." While she’s poking fun at her love of food or lack of funds, she’s also celebrating people of color. With the breakout song and latest single "We’re Already Royal," which she recently released the visuals for, being a highlight of the mixtape. The Reintroduction of Mumu Fresh features a collage of the many colors of Youssef, or Mumu Fresh, which she says is not so much her alter ego but herself. The mixtape is also peppered with some amazing compliments from hip hop greats like Common, MC Lyte and KRS-One, who himself says in an interlude, "You give me so much hope for female emcees, emcees period really."

Before we left Youssef at the DC Love Festival, we asked her what made her soul bounce.

DMV Bouncers can actually check out Mumu Fresh at her mixtape and video release concert at the Howard Theatre tonight. For more information and to purchase tickets, visit the Howard Theatre website. Every Bouncer who's looking for an emcee -- regardless of their sex -- with skills galore can listen to The Reintroduction of Mumu Fresh right here and download the mixtape for free on SoundCloud.