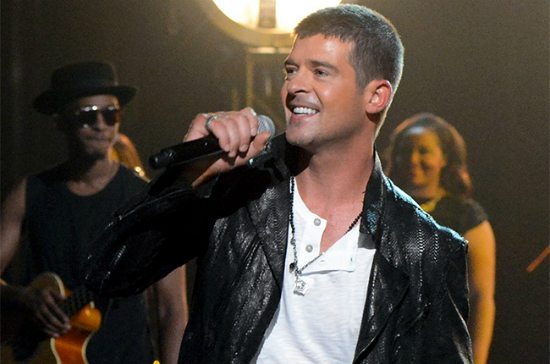 Robin Thicke doubled down on trying to get back in the good graces of his estranged wife Paula Patton last night at the 2014 Billboard Music Awards with the live world premiere of his new song "Get Her Back," aimed at doing just that. The "Blurred Lines" singer may have picked up four awards for last year's monster hit, but those were secondary to the continuation of his Baby Come Back World Tour, which started in February shortly after Thicke and Patton announced their separation.

Although Robin looked like his hair got into a fight with a pair of scissors and lost, he at least sounded on point singing the laid-back lovelorn groove as he detailed some of the mistakes he made and how he wants to right his wrongs. On a scale from one to Keith Sweat, "Get Her Back" ranks about a seven -- the begging lyrics were there, but Thicke needed to back them up with a little more passion and groveling in his delivery. Yet and still, this was a sincere performance from the heartsick crooner.

We'll see if this song melts the icebox where Paula's heart used to be and if Thicke and Patton reunite and live happily ever after like the characters in the romantic comedies the actress stars in. But if this tactic doesn't work, maybe Thicke needs to start a #GetPaulaPattonBack social media campaign next and get his fans involved. Will you retweet Robin's love and devotion?