Robin Thicke Is Really Determined To ‘Get Her Back’ 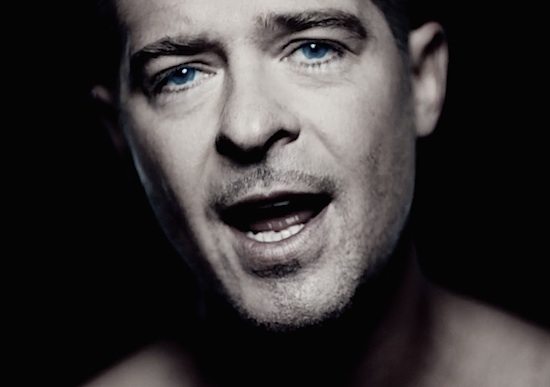 I don't know about you guys, but Robin Thicke's campaign to win back Paula Patton is getting creepier by the minute. First he dedicates love songs to her on tour, then he premieres "Get Her Back" on the Billboard Music Awards and decides to name his next album after her. Now, he's dropped the official video for "Get Her Back" and goes further down the rabbit hole.

Starring a nearly naked Paula lookalike and featuring what I hope are fictional text messages between the two soon-to-be-former spouses, the video is essentially one long begging and pleading session straight from Robin to his estranged wife. Robin cries, screams while submerging his face in water and even appears bloodied in the clip while "Paula" wears strange masks and does weird things. It's all just a little...bizarre. Which is too bad, as the song with its simple groove and heartfelt lyrics is pretty good.

Don't get me wrong, I'm all for fighting for your love. But damn, bruh, not like this.