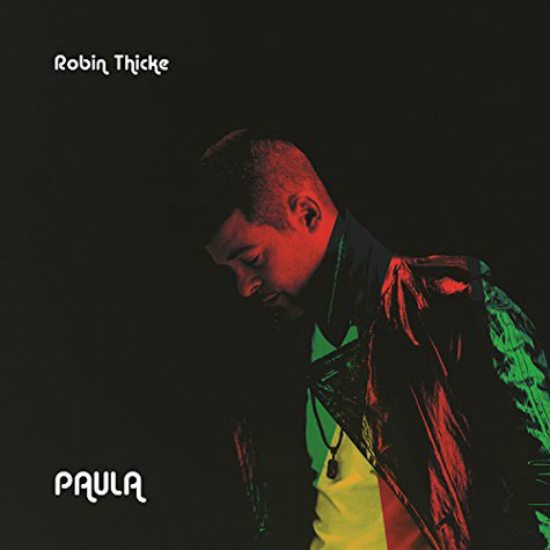 Robin Thicke's rush job of a new album to mend his broken marriage is ever more apparent with the reveal of the cover for Paula. The artwork for the blue-eyed soul singer's seventh collection is, well, pretty basic. Featuring just Thicke awash in red, gold and green with the title and his name in white lettering against a black background, the cover looks very homemade like he did it himself in Photoshop along with taking on all the writing and producing for this project. Not that Robin had to get all Cash Money Records on us with the imagery, but Paula Patton won't be taking him back for the art direction on this cover, that's for sure.

Simplistic album cover aside, it's what's on the collection that counts, right? And judging by the titles of some of these songs on the tracklist, Robin will be pouring it on molasses thick for the majority of Paula as he tries to win back his lady's love. We've already heard the lovelorn lead single "Get Her Back," but we'll soon be hearing songs such as "Still Madly Crazy," "Love Can Grow Back" and "Too Little Too Late." We'll find out soon enough the lengths that Robin Thicke has gone to and the level of begging that this record contains when we get Paula in our hands on Tuesday, July 1st.


TAGS:  paula patton, robin thicke
Previous: Can Fatima Make It ‘Rain’ Just Like SWV? Next: Marian Mereba Will Be Gone ‘Til ‘September’