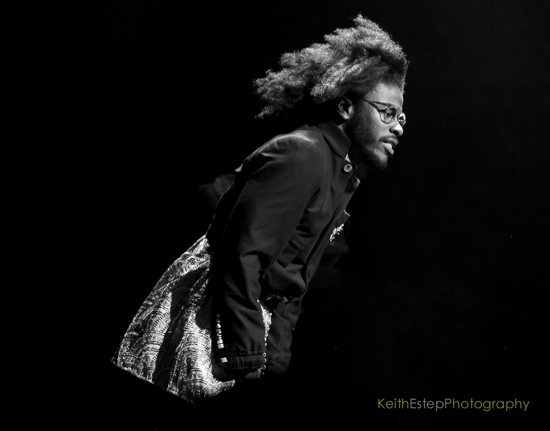 SB: You're on tour right now, what are your next stops?

JB: Yeah, I'm kind of surprised. I still don't believe them yet. They sent all the paperwork and stuff. I literally start the festival. It's me, Trey Songz, K. Michelle, Jazmine Sullivan and Nas, that's why I’m kinda confused. I’m appreciative. I'm not saying I'm not. I’m with it, but just a little confused.

SB: You'll be unconfused when you start performing, right? So tell us a little more about your documentary.

JB: The documentary is called Love Apparatus. It's a series on my website. I release three interviews a week, every Wednesday. I did about 300 [interviews] with women ages 17 to 65 and I asked them all the same nine questions. And it was kind of an enlightening period. I was very inquisitive as far as the feminine complex and a lot of things I was trying to understand to help me become a better person because I feel like women are natural nurturers and natural born teachers and helpers and healers and I feel like I have those feminine traits in me. I want to maybe expose other men to have them understand it's okay to be both masculine and feminine and be expressive of their emotions and not lie and be honest and all these things that I learned from the documentary. It was like a lot of life lessons happened all at one time. I found myself to be very emo for a year and a half and I didn't understand why. Being an artist, it's tough to get other men to be more open and be more selfless and a lot less insecure. That's pretty much what I've been trying to do. I try to build self-confidence in the men that aren't [confident] and I try to humble dudes who thrive on ego, and the same goes for women, too.

SB: And of course, what everyone wants to know — what do you put in your hair?

JB: Aww man, olive oil. I don't really get too crazy with it. I have this garlic deep conditioner that I use.

SB: Do you blow dry it yourself?

SB: But back to the music, what do you wish people knew about you/your music?

JB: People who never heard it before? To give it a chance. I feel like a lot of people know my name and they're like, "Oh, that's the guy with the big hair from Tumblr," or whatever the case, but people don't really take the time to listen to the music. Instead of just having to work with hype and, like, "Okay, everyone's telling me to listen to this so I'll listen to this." You hear my name enough times or you see my face enough times and you should take the time to indulge yourself in the art because you might be inspired.

SB: So, random question: You're stuck on an elevator with five totally different types of people and they're kinda freaking out. What do you sing to them to calm them down?

JB: What do I sing to them? Something that everyone can sing along [to]. So it’d probably be a Michael Jackson song.

JB: Anything from the Off the Wall album.

SB: And our favorite question here at SoulBounce.com: What makes your soul bounce?

JB: And schwaza. Oh, and discovery! I love new discoveries, yeah I like that. Yeah I like finding out new s--t. I get excited when I learn something new.