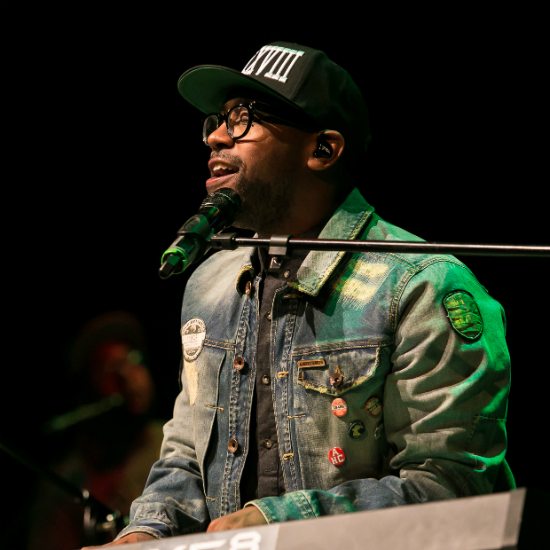 I converted from a casual follower of PJ Morton to a true believer in his artistry during his concert on Wednesday, July 23rd, at Yoshi’s Oakland. The GRAMMY-winning writer, singer, producer and musician performed a musical love letter to the great artists that influenced his craft, combined with poignant storytelling, a mastery of a multitude of genres and a commitment to bringing the fun factor back to R&B.

Playing the keyboard simultaneously with leading vocals, he opened with “I Need Your Love,” massaging the keys as carefully as a church organist during a sermon. With his father being gospel luminary Bishop Paul Morton Sr., it’s clear that the church was pivotal in his training and the sculpting of his sound. The Maroon 5 keyboardist smoothly transitioned into the song “Heavy,” which he recorded along with Adam Levine, using that ‘Nawlins’ brand of elite musicianship to create a sound infusing blues, gospel, funk and rock driven by his exceptional band, with a notable performance from guitarist Jesse Bond.

The rest of the set not only highlighted he and his band’s talent in multiple genres, but it also gave subtle and not so subtle nods to the icons that shaped Morton’s sound. He wove Bob Marley’s classic “Is This Love” effortlessly into his own “Love You More.” He beautifully blended Otis Redding with “I Never Want to Leave” and sprinkled in elements of Prince’s “Purple Rain” as he played “I Need You.” Morton’s “inner-Stevie” became most palpable while playing the inspirational “Mountains & Molehills.” His just as engaging backup vocalist/percussionist Jojo Martin even gave a subtle nod to gospel legend Rance Allen with one of his playful runs. While many popular artists might name drop music greats like Stevie Wonder, Prince or Marley as primary influences, PJ Morton is able to project the consciousness of his collective influencers through the musicianship of his group, creating fluid and seamless transitions from blues to funk to rock to gospel to classic soul.

As a storyteller, PJ Morton skillfully uses lyrics and melodies to illustrate the range of moods and feelings involved in searching for, finding, staying in and sometimes having to abandon love relationships. While some performers are detached from their audience, leaving them feeling like passive spectators, Morton’s concert experience feels more like an intimate journey through the stories in each song.

Also, while many R&B and soul singers take their sexy a wee bit too seriously in their live shows (sorry, Trey Songz), Morton rejected the cliché slick sex symbol approach as a means to reach the ladies in the audience. Instead, he engaged the audience by making them feel like it was a family function or a "kick back" at the house, even playfully evoking the Cheers theme song without ever letting the romance leave the room.

With his homage to the greats before him, his penchant for poignant storytelling and the infectious energy of he and his band, PJ Morton retained his title as the "Live Show Killer" in Oakland and has us anxious for his return.

To find out PJ Morton's tour dates, visit his website.