Smokey Robinson & Mary J. Blige Enjoy ‘Being With You’ 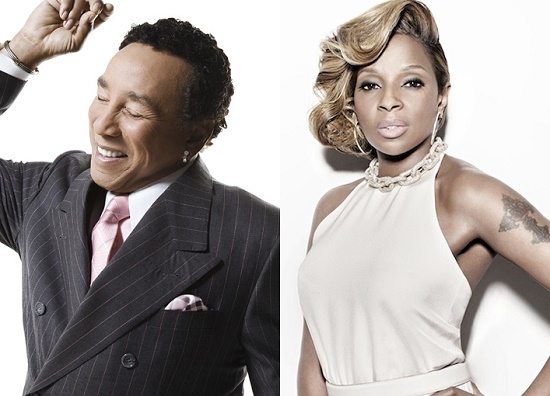 Smokey Robinson's duets album Smokey & Friends has already brought us an update of his old school classic "Quiet Storm" with crooner John Legend. Now, we get another preview of the set with his duet with Queen of Hip Hop Soul Mary J. Blige, "Being With You." The smooth 1981 original was a major hit for Smokey, peaking at No. 2 on the Billboard charts. For the 2014 version, the sound is updated a bit as Mary and Smokey alternate verses and parts of the chorus over modern keys and programmed drums.

Like Legend joining in on "Quiet Storm," this take on "Being With You" is serviceable enough, but when compared with the original, it just doesn't match up. For one, MJB seldom does mellow, and she definitely doesn't here, ramping up the song almost out of the gate with vocal histrionics that don't match the mood of the song. Secondly, because of Mary's performance, it feels like the two are singing different songs, as Smokey's energy here is much more subdued than Mary's.

That being said, it's hard to make something bad when you have two legendary vocalists together on one track, and the two seemed to really be digging each other's company while in the studio.  Take a listen to "Be With You" and let us know if you're enjoying Mary and Smokey's update.


TAGS:  audio, john legend, mary j. blige, smokey robinson
Previous: La Toya Jackson Wants You To Get On The Floor With ‘Feels Like Love’ Next: Banks Will Have You ‘Beggin For Thread’