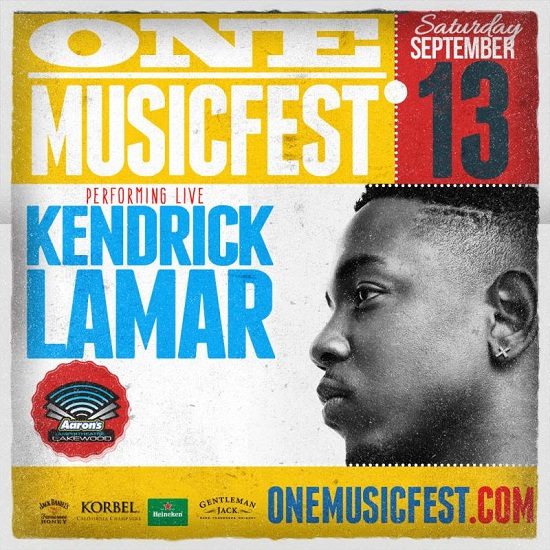 Though summer is coming to an end, that doesn't mean that music festival season is over. The ONE Musicfest is set to rock Atlanta for the fifth time when it takes place on September 13th. The festival comes packing major star power this year with Kendrick Lamar, Nas and Jhené Aiko  tapped to take the stage. Oh, but it doesn't end with just those three. In addition, Amel Larrieux, Cody ChesnuTT, Bilal, Daley, Method Man & Redman, Alice Smith and Isaiah Rashad will also be taking the stage for the ATL crowd.

With so many acts, it's no surprise that the event will be taking place on three stages within Atlanta's Amphitheatre this year. But that's not the only new addition. Organizers have also included a food truck and art village for festival goers and myriad activities for all to participate in. Oh, and did we mention that there will also be a Soulection Soundstage featuring Lakim, Andre Power and The Whooligan?

Clearly, if you live in ATL or anywhere nearby, this one is the sure shot. Do you want to buy tickets and get more information about the festival? Of course you do, and you can do just that by visiting ONE Musicfest's website or following their accounts on Twitter and Instagram.