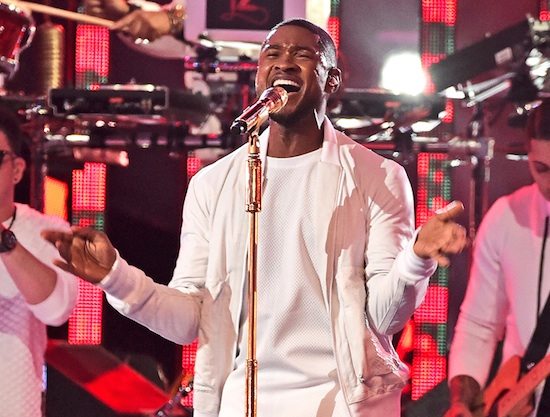 At last night's 2014 MTV Video Music Awards, R&B crooner Usher had the Los Angeles Forum on their feet. Performing his Pharrell Williams-produced single "She Came To Give It To You," the Atlanta-bred singer brought his A-game to the stage. Drenched in all white, he began his performance by channeling his inner Michael Jackson with a signature solo dance break, and then invoked his inner trill as he rapped and told the audience to turn up.

Usher wooed the crowd with his gold microphone and troupe of dancers, also clad in white, for a funky Jackson-inspired performance with some heavy duty choreography. To put the cherry on top, Nicki Minaj dressed in a malfunction-free, fur-trimmed outfit, joined Usher on stage to drop her verse and her derriere, which became a convenient prop for the crooner. Minaj served as the drum to Usher's bass as he strategically bounced on her while playing his guitar, ending their collaboration with a firm slap. One of the best performances of the night ended with the crooner dancing and being caught by what we can only describe as the R&B spirit after he delivered an energetic sermon we could believe in.

Catch Usher and Nicki Minaj give it to us in their 2014 MTV Video Music Awards performance that left us wanting more.