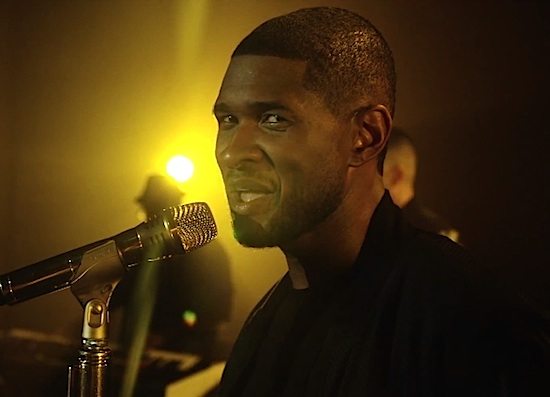 Usher is having the best week ever, and it's only Tuesday. Following the release of a new song and tour announcement over the weekend, the R&B superstar rides the wave of the momentum from his performance of "She Came To Give It To You" live at the 2014 MTV Video Music Awards with the release of the track's music video.

The camera follows Usher as he walks into an electronics store -- not Best Buy, but one that sells everything from hot plates to pagers -- but he's not there to shop. Instead, he keeps walking to the back of the store while security monitors clock his every move. He goes through a door that leads him into the stockroom and past groups of Asian men playing Chinese dominoes while Pharrell Williams oversees it all from above. Usher keeps on stepping and walks deeper into to the back, goes around a corner and enters an underground night club. It's on now.

The song finally begins and so does the real action. Sweaty bodies are moving, and next thing we see Usher singing on stage with a live band before the groove gets him and he joins the dancers. They're sexy and their dance moves are sexier, but something more sinister is afoot with skulls replacing faces, eyes turning into white puddles and other random bizarre special effects. Despite all that, everyone's motto is clearly "turn down for what?"

Nicki Minaj's cameo is tame compared to her and Usher's head-to-booty bounce routine on the VMA telecast, with the rapper simply sitting on a desk in front of the security monitors spitting her verses. Pharrell is seen a few more times still chilling, playing the back and holding up the wall. It was nice for his two collaborators to show up, but this video is clearly Usher's show.


TAGS:  Nicki Minaj, pharrell williams, usher
Previous: Janelle Monáe Brings Her ‘Dance Apocalyptic’ To The Streets Of Brooklyn With Pepsi’s #RealBigSummer Next: Morning Soul: My Milkshake Brings All The Boys To The Yard