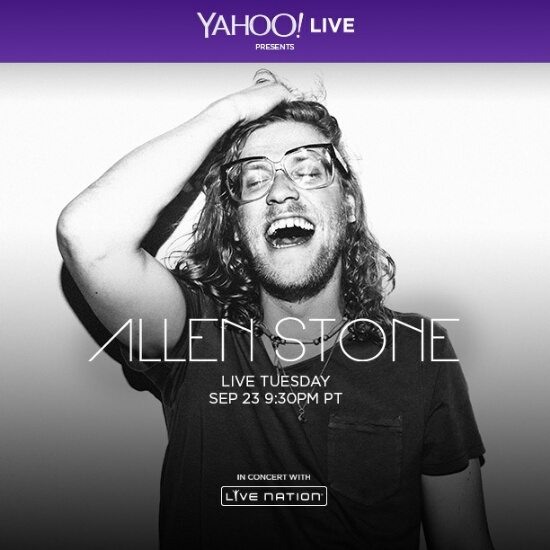 A few months ago we gave you the heads up that Allen Stone would be hitting the road on a North American fall tour, and on Tuesday, September 23rd said tour will kickoff in San Diego, California. If you're lucky and/or smart enough to have snagged tickets to his concert at the House of Blues San Diego, then you'll be amongst the first people anywhere to hear some of Allen's new material from his upcoming major label debut album, The Radius, in addition to catching one of the best live shows you'll see period. Seriously, Allen Stone is phenomenal in concert in case you didn't get the memo. If you also didn't get tickets or aren't even in San Diego to catch this concert, then don't despair because thanks to Yahoo! Screen and Live Nation you'll be able to see the concert live from the comfort of wherever in the world you are on Yahoo! Live.

Allen Stone live from San Diego will be broadcast on Yahoo! Live for everyone to see online or using the Yahoo! Screen app on September 23rd at 12:25 am ET/9:25 pm PT. So make plans now to check him out for yourself for free, and you too will become a believer and then want to buy a ticket to see him in person when he comes to your city on tour. SoulBounce will be attending this show and live tweeting it, so be sure to follow along on Twitter with @SoulBounce and @YahooScreen while you're watching and getting your entire life along with Allen and everyone else in attendance.