Elle Varner Brings Her ‘Dance’ To ‘The Queen Latifah Show’ 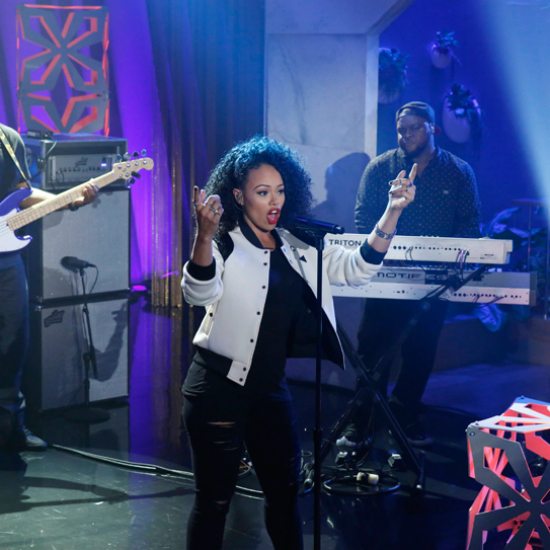 Needless to say, we here at SBHQ are super excited that The Queen Latifah Show is back for its second season. And we're even more excited that Season two's inaugural musical guest is none other than curly-haired talent Elle Varner. The singer is on the promo trail, with her new single "Don't Wanna Dance" and its new video gaining some momentum in advance of her upcoming new album, 4 Letter Word.

She took the stage on Queen Latifah's Big Sexy set to give the audience both in studio and at home a slightly stripped-down version of "Don't Wanna Dance." While the original's hip hop-inspired beat and more prominent sample is appreciated, the simpler take sounded quite lovely and really showcases Elle's voice quite well. And the audience, who were on their feet for the entire performance, were generous with their praise for the singer, with perhaps the Queen giving her one of the biggest compliments of all by recognizing Elle's skill as a singer and songwriter.

Queen Latifah's premiere airs today in all markets, so be sure to check your local listings. If you've already seen it (or just want a sneak peek), check out Elle doing her thing right here.


TAGS:  Elle Varner, queen latifah, The Queen Latifah Show
Previous: Syleena Johnson Readies Us For ‘Couples Therapy’ With The Album Cover & Tracklist Next: Merna Returns With Something For The ‘Young & Reckless’