Is This The ‘Art Official Age’ Of Prince? 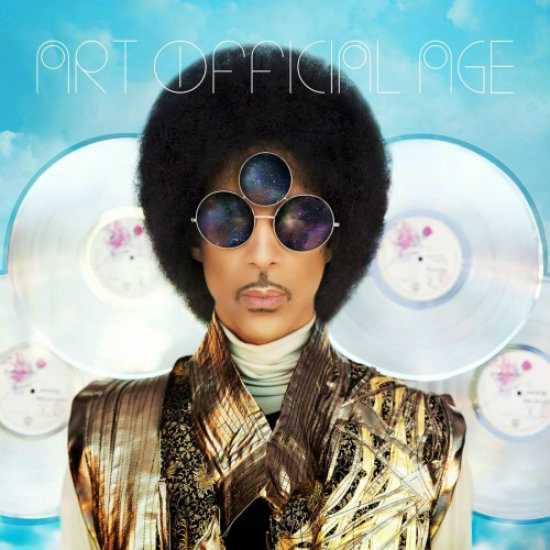 In 1993, to accompany the release of The Hits/The B-Sides, Alan Leeds wrote of the work contained therein, “Maybe historians will end up treating these years like pre-Strayhorn Ellington or pre-electric Miles.” That he would compare Prince to those staggering talents of jazz was incredibly apt. The intervening years have shown Prince to have that same stubborn resistance to the game of the music industry that Miles Davis shared, while this new album, Art Official Age, once again demonstrates the supreme talents of this musical behemoth. A man who has exhausted every superlative in the book. After all, what else is there to say about the artist once, and for all times, known as Prince?

Well, it turns out there’s a lot to say about this new album. An album that finds the pop iconoclast at the top of his game. An album so beautifully constructed and performed that other artists must weep at his vocal delivery, impeccable musicianship and lyrical power. It finds him slowing down, speeding up and skewing out his velvet voice with the same unbridled playfulness of days gone by. That impudent sparkle in his eye is back and the world is a better place for it.

"Art Official Cage" opens, aptly enough, with the words "Welcome home, class" and is the kind of maelstrom of funk, dance and rock that only he knows how to do. A swaggering show off of a track that shows off every musical flirtation he has ever had and somehow survives. It's a poke in the eye for anyone who dares imagine they can do what he does. “Clouds” is a delightful shuffling piece of funk underpinned by wondrous elastic bass and incredible vocal production. Layer upon layer of vocals wrap their arms around you and envelope you in warmth, a feeling only intensified by the dulcet tones of Lianne La Havas, whose gloriously mellifluous voice could stop a man dead in his tracks.

Early single release “Breakdown” is a standout track, with Prince as lyrically strong as he has ever been. The lurching bass drives this beauty forward and reflects the regret entwined in the lyrics. "Gimme back the time, you can keep the memories," he sings, indicating a man in touch with his own mortality and eager to make amends for the errors of the past, while offering hope with the line, "See there’s a door that you can walk through, where there used to be a wall." This is as good a song as he has aired in many a year, and it comes complete with the passionate yelps and wails only he can make. “The Gold Standard” is, plainly put, a beast. A "Bob George" inflected funk groove of limitless fun with clipped, scratchy guitar chopped to within an inch of its life and brief stabs of horns. The second half of this jam is eerily reminiscent of “Superfunkycalifragisexy” and Lovesexy-era funk heaven, but if you can’t be influenced by your own brilliance, who can?

In “U Know” there is a languid, slow burn groove that threatens to scorch the bedroom sheets with its breathy whirlwind of reversed beats and rewound lyrics. Based around a song by Mila J (“Blinded”), it offers a curious and not at all surprising piece of Prince related trivia. Mila J was seven when she was cast in the video for "Diamonds and Pearls" way back in 1991 -- look carefully and she’s there blowing bubbles. So just you remember this: this is Prince’s world, we are all just guests here. More elastic bass underpins “Breakfast Can Wait,” his paean to early morning loving, while “This Could Be Us” has those same heavenly vocals layered ad infinitum and slices of sheer guitar perfection to make a supreme midnight groove. Listening to simile heaven like, "You know you want me like a new pair of shoes," reveals that wink of an eye cheekiness that made his ribald early works such a thrilling prospect.

“What It Feels Like” is lifted by its sub-aquatic bass and more of the hallmark guitar perfection and allows a bit of breathing space before the climax of the album, while "Affirmation I & II" helps set the scene for the final play of the record. And what a final play it is. “Way Back Home” tiptoes along the line between euphoria and heartbreak, with Prince’s voice shot through with vulnerability and pain. This is also a vocal masterclass. Every note is inflected perfectly, delivered like an arrow to the heart. The thudding bass drum drives it toward a climax that never comes, all that pent up emotion left hanging by the most sudden of endings. Like that old showbiz adage says: Leave ‘em wanting more. Lyrically it offers a more personal bent. "I never wanted a typical life / Scripted romance, a trophy wife," he sings and, frankly, it made the hairs on the back of my neck stand up.

“FUNKNROLL” opens with deliciously raucous and sleazy guitar before exploding into Prince impersonating Pharrell Williams, who in turn is impersonating Prince. Which is to say, Prince does it better than anyone else could. Sparse clean funk beats to the accompaniment of short, sharp stabs of guitar and "Camille" laying the funk down vocally. All of this does nothing to prepare you for the second half and the U-turn that sends it in a completely different dance direction. That’s just what he’s been doing for years and nobody does it remotely like him. “Time” is the kind of jam he turns out in his sleep with so much bass, even his slow tempo stuff drips with funk. The beautiful “Affirmation III” is a refrain of the album highlight “Way Back Home” and another chance to delight in the spoken word performance of Lianne La Havas, ending with the lyrics, "There is really only one destination, and that place is you. All of it, everything, is you."

Which begs a question. Has he found that destination? Is that why this album feels a cut above his more recent work? Or has he been there all along, just waiting for us to catch up? I know where my money is.