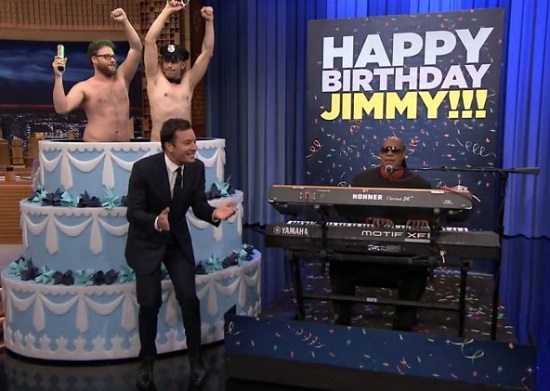 Late night talk show host Jimmy Fallon celebrated his big 4-0 in a big way this past Friday. During an episode of The Tonight Show Starring Jimmy Fallon, his crew surprised him with special guests in honor of the special occasion. First, actors Seth Rogen and James Franco popped out of blue birthday cake to laughs from Fallon and the audience. However, the twosome weren't the true surprise guests of the night. That honor belonged to none other than music legend Stevie Wonder.

He first came on to the stage to perform a custom rendition of "Happy Birthday" for Jimmy and later sat down with the host for a hilarious interview. Then the icon, who will be going on tour this fall to perform his seminal 1976 album Songs in the Key of Life, performed his hit song "Sir Duke" for the television and in-studio audience much to Jimmy's (and our) delight. And for those Tonight Show viewers who are also internet savvy, Stevie also recorded a rendition of "All Day Sucker" with The Roots backing him up.

While we were already itching to go see the veteran performer on the road this fall, these performances have pretty much prompted us to break open our piggy banks to make sure we are in that number when the tour starts in November. If you happened to miss Jimmy's momentous occasion, we've got you covered. Check out clips of Stevie's performances right here!