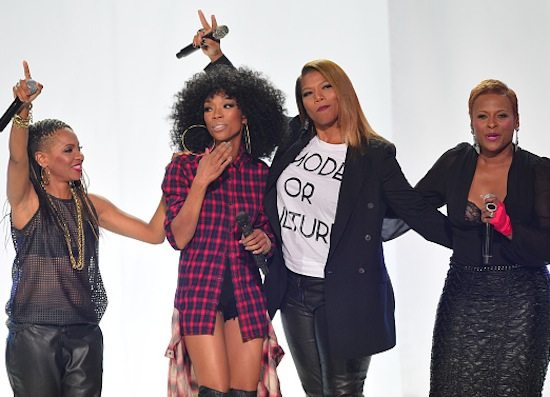 20 years after the release of her self-titled debut album, Brandy took it way back, performing the remix of her debut single, "I Wanna Be Down," live at BET Hip Hop Awards 2014. As with the original, now iconic remix, Brandy got some help on stage from '90s hip hop heavyweights Queen Latifah, MC Lyte and Yo-Yo. Together, these four ladies not only shut it down with their flawless performance, but reminded the audience and viewers of what's missing in mainstream hip hop and R&B these days, especially when it comes to women. Solidarity amongst women, tight flows and lyrics and, quite simply, wearing clothes are just a few of the not so subtle differences between hip hop then and now highlighted by the performance.

The performance kept things simple, opening with Brandy delivering her signature vocals before MC Lyte appeared to drop her verse, followed by Yo-Yo and finally Queen Latifah. Set against a brilliant white backdrop, which seemed to be a nod to the simple black and white styling of the remix's music video, Brandy, MC Lyte, Yo-Yo and Queen Latifah's performance stole the show and has us wanting to bow down and be down with this foursome.