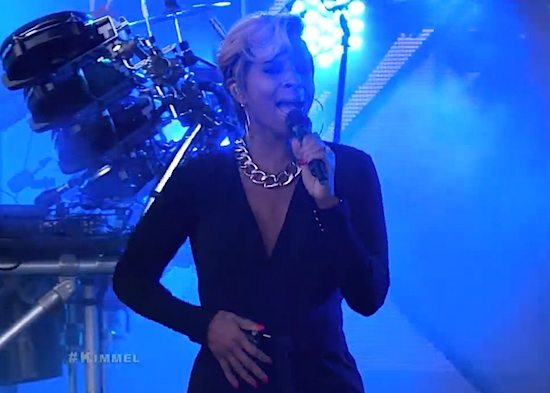 The heat returned to Los Angeles yesterday with another heatwave and British soulful house kings Disclosure both returning to the city. While Angelinos sweltered in temperatures topping 90 degrees, the Lawrence brothers broke out into a sweat on the Jimmy Kimmel Live AT&T Outdoor Stage for two live performances.

For the first, the bros performed "F For You" with an assist from none other than Mary J. Blige. If you remember, MJB jumped onto this song back in January for an updated version that turned it all the way up and brought her soulful swagger to the party. Well, last night she did just that once again when she sauntered on stage for the second verse and proceeded to rock the house with Guy and Howard. Mary J. was in fine form and voice, even giving some shades of Loleatta Holloway along the way. It was quite an enjoyable showing that makes us hungry to see what else Blige and these Brits have in store in addition to "Right Now" from her upcoming The London Sessions project.

After getting everyone good and sweaty with "F For You," Disclosure continued their soulful house workout with a performance of crowd pleaser "When A Fire Starts To Burn." Guy and Howard weren't joined by Eric Howard, whose voice is motivational rant is sampled on the song, but they made do playing a variety of instruments and MPCs between the two of them to keep the audience engaged. The song's thumping groove was accentuated by simulated fire raging on huge screens in the background.

With these two blazing performances, it was awesome to see Disclosure set it off on late-night TV.