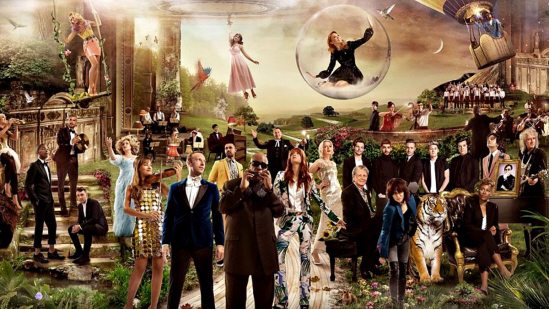 So Pharrell Williams, Paloma Faith, Emeli Sandé, Lorde, One Direction, Kylie Minogue, Sam Smith, Florence Welch, Dave Grohl, Chris Martin, Sir Elton John AND Stevie Wonder all walk into a orchestra hall and...no, this isn't the beginning of some really laborious crude joke, it's actually all the talent, and then some, involved on BBC's Children In Need charity track, which premiered today via the newly launched BBC Music. The 26-artist list is exhaustive, very exhaustive, but the song and its accompanying video aren't.

Penned by the Beach Boys' Brian Wilson, "God Only Knows" swirls piano-pop rock with orchestral elements courtesy of  the BBC Concert Orchestra that evokes in a similar tradition as other famous socially aware charity tracks like "We Are The World," "Do They Know It's Christmas?" and "Just Stand Up." Yet, the visual is much more appealing as nobody is pensively clutching headphones or screaming into microphones, as each prospective artist is in their "natural" habitat. Like for example, Lorde is wearing dark angel wings while looking bored, Kylie Minogue is floating in a soap bubble...catch my drift?

Usually I'm the cynical one who dislikes these kinds of cloying "reach into your pocket" songs, but I understand their purpose and respect them and the artists that do them. Plus "God Only Knows" is surprisingly more upbeat than other charity songs, thanks to it being a remake of a Beach Boys hit from 1968, and it is over within three minutes, which is impressive considering how jam-packed with talent the track is. The "God Only Knows" project is not only helping with children in need, but is also the premiere track to help launch BBC's music initiative, BBC Music. You can find more details about it the song, its cause and BBC Music at their official site.