Pharrell Welcomes Fall With A ‘Gust Of Wind’ 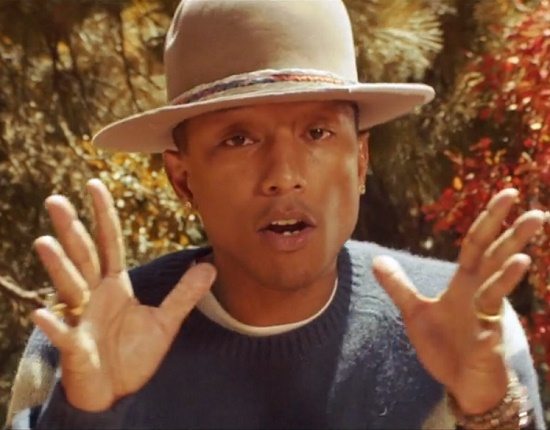 Just when we were really settling into the psychedelic anime visuals for his video "It Girl," Pharrell Williams goes and drops yet another clip from his critically acclaimed album G I R L. This time around, he brings his Daft Punk-featuring song "Gust Of Wind" alive with an autumn-themed visual.

The video starts off with Pharrell (and the return of that damn hat) coming across sculptures of Daft Punk's signature helmets in the middle of a forest. A troupe of women soon emerge dressed in the reds, golds and whites as they represent the changing colors of nature. They also represent all races, causing the video to almost look like a well-produced ad for United Colors of Benneton. Like most of his videos from G I R L, that's about as deep as the video's concept gets. Still, it's a visually arresting scene, with some added punch from the special effects animating the robots' helmets.

Being that "Gust Of Wind" is the fifth (!!!) video to come from Pharrell's seven-month-old sophomore album — and the second in under a week — we can't help but wonder if Skateboard P will attempt to go for a clip for all 10 of G I R L's tracks (we certainly wouldn't be mad). While we ponder, go ahead and check out "Gust of Wind" below.