Jazmine Sullivan Puts On Her ‘Mascara’ Live In NYC 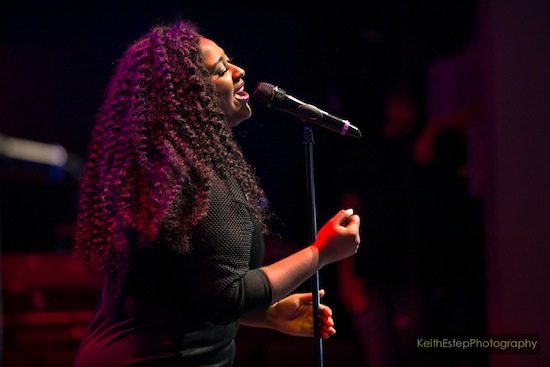 In the lead up to the highly anticipated release of her third album, Reality Show, after a lengthy break from show business, Jazmine Sullivan has been hot on the promo trail. Sullivan has been leaving fires in her wake with her phenomenal performances across the USA that are giving fans a taste of what's to come from the new album. Last night, the powerhouse singer stopped by New York City's Gramercy Theatre and performed a new number, "Mascara," to the fortunate crowd. Lucky for us, someone in the audience captured the moment.

While her latest single, "Forever Don't Last," sees Sullivan in the jaded, jilted lover light that we know and love, on "Mascara" she sings about the pressure to stay "on" and not settling for less than her worth, perhaps giving some insight into why she stepped away from the spotlight for four long years. Just like her fans, we here at SoulBounce are thankful that the Jazmine drought is over, and "Mascara" only reaffirms that. Sullivan laces the R&B track with her out of this world vocals, but remains relatively restrained and yet perfectly on point throughout the song with her luscious tone and pitch. However, she lets loose three minutes in, along with the band, taking everything to another level as only she can. After watching the performance, you'll have no doubt of the sizzling heat that will be contained on Reality Show when it drops.


TAGS:  jazmine sullivan
Previous: SZA Tackles ‘Sobriety’ With The Help Of Thundercat Next: Jesse Boykins III Lets You Know That ‘Our Tonight Is Mine’