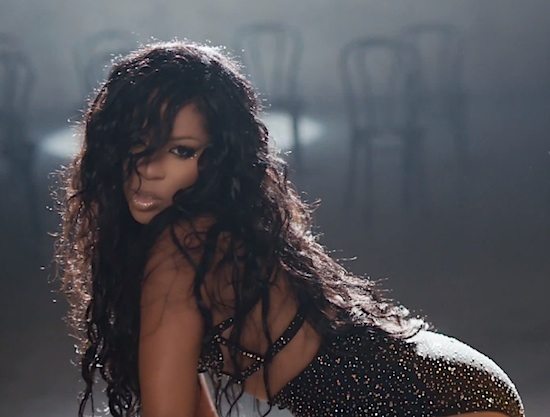 While the rest of us were probably struggling with a case of The Mondays, K. Michelle arguably had the best Monday ever. The singer/reality star not only debuted the new song "Maybe I Should Call" from her upcoming Anybody Wanna Buy a Heart album, but her new VH1 reality show, K. Michelle: My Life, premiered with a mixed bag of characters and K's colorful wit and country grammar. Kimberly and VH1 didn't stop there, however, with the cable network that made her a star also premiering the music video for #AWBAH's first single, "Love 'Em All."

Instead of going over-the-top flashy or having something as basic as a plot, K. shows viewers a few new dance moves she's picked up while she sings into the camera. The diva occasionally shares the screen with a handful of professional dancers who do all the heavy lifting or headless male mannequins who are there for effect, but the focus stays on K. and her cavalcade of provocative outfits and wigs for the majority of the visuals. his music video is a showcase for K. Michelle to show fans what she's working with in costumes that hug her every curve. She looks great, but, more importantly, she seems happy and exudes confidence.


TAGS:  K. Michelle
Previous: Morning Soul: Yeah, Baby, She’s Got It Next: Next Wants You To ‘Leave With’ Them