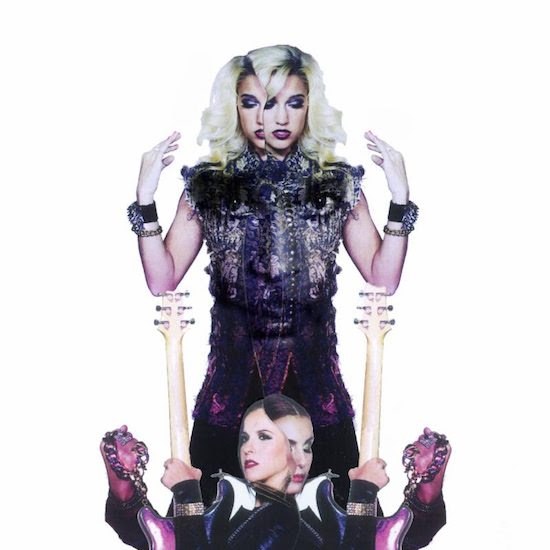 And so it is that this most recent return to popular consciousness finds Prince jettisoning the widely held common sense of releasing one album with furious promotion, in favor of two musically diverse offerings released simultaneously. Whereas Art Official Age found him secreted away with Joshua Welton turning out glimmering, shimmering funk and soul, PLECTRUMELECTRUM finds him loose, exceedingly collaborative-minded and shredding his guitar like a glorious amalgam of Jimi Hendrix, Carlos Santana and your favorite guitar player in an extension of the epic 3RDEYEGIRL Hit and Run Tour of the last 18 months or so.

The latter facts will please a large number of Prince fans, as many have waited since long before 1996’s false start Chaos and Disorder for a bona fide balls-out showcase of his guitar prowess. So is this 3RDEYEGIRL collaboration that guitar-driven album that fans have dreamed of and is it actually any good? The answer to both of these questions is a resounding yes.

Album opener "WOW" is a reworking of "The Unexpected" from Liv Warfield’s last album of the same name and finds the opening drum salvo give way to Prince's delicate and unexpectedly meek vocal delivery, before the blistering guitar work takes a grip and never really lets go. And thus the scene is set for the album. The gloriously impeccable band mentality and ferociously good musicianship of 3RDEYEGIRL is underpinned by a genuine sense of fun and sticky like glue tunes.

"PRETZELBODYLOGIC" swaggers into view like a drunken uncle and funks up the joint hard, all the while maintaining the rock edge that permeates all that the album offers. "AINTTURNINROUND"’s scuzzy, fuzzed-up guitar is a joy and the second half is a tumult of freewheeling lead guitar and rumbling bass. Title track "PLECTRUMELECTRUM" is a cocksure instrumental piece written by 3RDEYEGIRL's guitar slayer Donna Grantis, with a solo at three minutes leaving scorch marks in the very air it fills, it is a perfect showcase for the virtuoso performers laid down on these two-inch reels. What follows next brings the record down from the edge of funk-rock oblivion and calms things down a touch. "WHITECAPS" is a delightful ballad with drummer Hannah Ford afforded her place on lead vocals and it settles things down well, while preparing the album for another all-out assault on the castle of funk-rock. "FIXUPURLIFE" is all steepling solos and the ever-so-slightly ironic sound of Prince singing of the "misogynistic wall of noise." The halfway mark of the album, "BOYTROUBLE," is a real gem. It’s a spiky bit of angular funk that leans heavily on the attitude-filled vocals of Lizzo and Sophia Eris and it is all the richer for their contribution.

"STOPTHISTRAIN" provides another pit stop on the road to guitar glory with a chilled vibe brought to the party to bring us down a notch or two before a moment of dizzying irony. 3RDEYEGIRL, which includes that veritably unstoppable force of musical production, shine brightest on a track they didn’t write. "ANOTHERLOVE," originally recorded by Alice Smith, is a fabulously angry and bile-filled treasure crammed to the brim with dizzying guitar work. It is a real highlight of the set. "TICTACTTOE" drifts by filled with swooning, sweet innocence, while "MARZ" is a short but sweet bit of straight-up driving rock. "FUNKNROLL" opens in exactly the same way as the alternate version on Art Official Age, but the grimy funk of that version is replaced here with a rock-inflected roll carried forward by a tidal wave of hi-hats.

As a singular album, PLECTRUMELECTRUM offers a staggering glimpse into the playing of one of the greatest living guitarists (and musicians, period) and the embryonic career of 3RDEYEGIRL. Yet when taken as the second part of a double helping of purple madness, it is simply mind-blowing. How can one man contribute to two such different albums, yet somehow make a cohesive statement? That, for the unannointed non-Prince fans among you, is the glory of the man. Jack of all trades, master of none? Quite the opposite, actually. Master of everything, possibly even the universe itself.