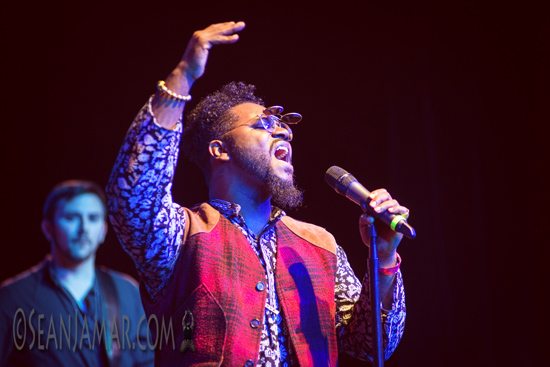 Despite the frigid temperatures outside, it was a hot time up in Harlem last Friday night. That's because Harlem Stage continued its ongoing Uptown Nights series in grand fashion by showcasing the talents of indie soul singer Chris Turner. Known for his transcendent work with Bilal and ERIMAJ, Chris was no slouch in the solo department either. Dressed like a hybrid of '60s love child and an early 2000s neo soul artist, Chris stepped to the stage after an introduction from contemporary José James and proceeded take the audience — which included James as well as Jesse Boykins III — and got the crowd open with a Marvin Gaye cover before serenading them with a few tunes from his album LOVElife Is A Challenge, including "Find A Way," "There's No Way" and the first-ever performance of his new song, "Lay You Down."

However, the highlight of his set came near the end, when he performed his well-known track "Liquidlove." While his live treatment of the track surpassed the recorded version, with the singer finding spaces and pockets that elevated the song to higher heights, it was when he invited José and Jesse to join in that things got really interesting. The trio riffed and ran their way around the track, each taking turns in supporting and leading roles as their voices beautifully harmonized together. It was truly an unforgettable end to an already dynamic set.

If you didn't happen to be in attendance at the event, put on LOVElife Is A Challenge to set the mood and click through our photo gallery from the night.