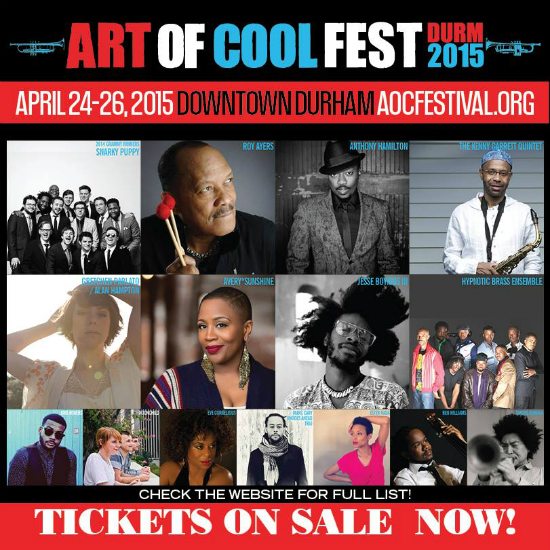 For the second year in a row, Durham, North Carolina will be the scene of the Art of Cool Fest in April, and 2015's event will be another epic extravaganza of live artistry. After completing a successful Kickstarter campaign, AOCF organizers have been busily planning for a stellar sophomore year, and from what we're hearing they are well on their way to making that happen.

Due to popular demand, the Art of Cool Festival has expanded to three days and will occur from Friday, April 24th through Sunday, April 26th. Knowing the dates are great, but what everyone is really waiting to find out is who will be appearing there. Wait no more, because the roster of performers has been announced and the lineup is another enviable collection of soul and jazz artists.

From GRAMMY winners to underground upstarts, the 2015 artist list has something for every ear. Scheduled to shine on opening night is jazz legend Roy Ayers, who is guaranteed to turn things out with his vibraphone, amongst other tricks up his sleeve. His set may be a mystery now, but we do know that North Carolina's own Anthony Hamilton will be turning things up with a performance of his 2003 debut album, Comin' From Where I'm From, in its entirety. Hamilton isn't the only SoulBounce fave who'll be in attendance, with Snarky Puppy, Jesse Boykins III, Gretchen Parlato, Kris Bowers, Moonchild and so many more all scheduled to appear over the course of the three days, ending with a Sunday VIP Jazz Brunch headlined by Avery*Sunshine. Impressed yet? We thought so.

Get to know all the performers on the AOCF website, and stay tuned in the coming months for more artists to be added to the final lineup. We've seen the wish list, so trust us when we say that if (and hopefully when) these last few artists confirm, this will be the music festival to attend in 2015. Start making your plans now and purchase ticket packages from the Art of Cool Fest website.