Kendrick Lamar Closes Out ‘The Colbert Report’ With An ‘Untitled’ Jam 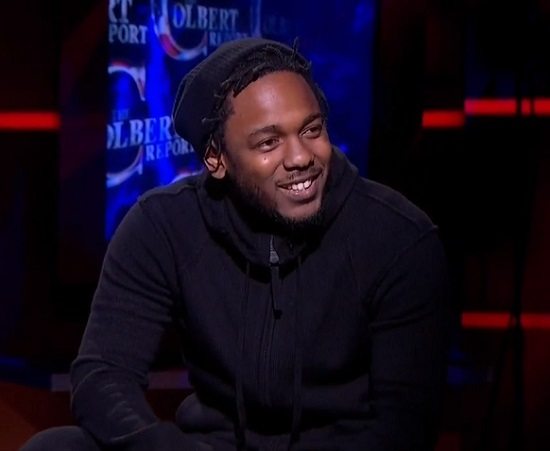 Sadly, Comedy Central's The Colbert Report is no more. With host Stephen Colbert moving on to take the reigns from David Letterman when he leaves CBS' Late Show, the satirical politics recap closes up shop this week. The show will, without a doubt be missed, but at the very least, it is definitely going out with a bang.

Colbert smartly selected hip hop king Kendrick Lamar as the show's final musical guest, and K. Dot most certainly delivered...and then some. After sitting for a brief interview with the host, in which Colbert reminded Kendrick that he was the final musical guest (no pressure or anything), Kendrick took the stage with his rag tag crew to perform an as-yet-untitled jam from his sophomore set. Oh, did I forget that his rag tag crew consisted of Anna Wise (of Sonnymoon fame), Bilal, Terrace Martin and Thundercat? Yes, the talented quintet all took the stage for the jam, which is sure to be one of our favorites from the upcoming album.

With both Anna and Bilal handling backing vocal duties and Thundercat and Terrace holding down the jazzy, funky soundbed, Kendrick waxed political as the lyrics took him from trying to holler at a young lady to sharing the wisdom that he's learned from men of different races and backgrounds. As the song progresses, his spitting gets even more rapid fire and builds to frenetic, dizzying moments. If this and "i" are any indication of where his new project is going, be prepared to be singing Kendrick's praises well into the next year.

Check out the video below and see if you love it as much as we do. [Spoiler: You will.]