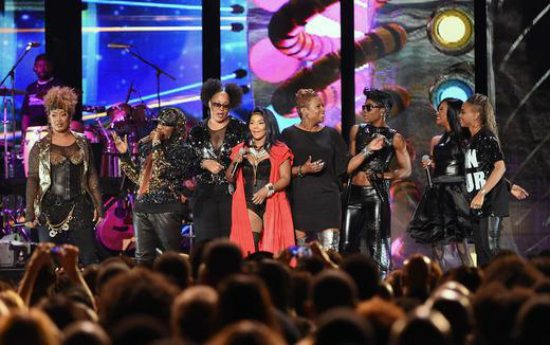 Kool & The Gang may just be one of the most sampled bands in music history. With unforgettable songs and grooves that decades later still just won't quit, can you blame the younger generation for wanting to bring some of the group's influence to their own work?

To celebrate the band and mark their influence, the Soul Train Awards honored the group with performances that mixed the Kool & The Gang originals with the songs they inspired. Kicking things off was Doug E. Fresh, who did a bit of "Let Me Clear My Throat" and grooved to "Jungle Boogie" before acting as the tribute's de facto MC. He then brought out crooner Tank for a version of "Get Down On It" that got a bit lost in the sauce, though everyone seemed to be having a good time on stage. Next, they smoothed things out with a bit of "Summer Madness" and then flipped the beat to "Summertime," with MC Lyte and Elle Varner taking over duties on the DJ Jazzy Jeff & The Fresh Prince classic.

Soon, Joe and Tamar Braxton hit the stage to give us a dose of "Too Hot." It was a passable performance, though Tamar's vocal theatrics left a few a bit lukewarm about her contribution. Luckily, the fiery Liv Warfield and Tessanne Chin were up next and delivered a rousing rendition of "Celebration" that got the crowd hyped before Ma$e and Justine Skye closed out the first part of the tribute with a slick performance of "Feels So Good" that segued a bit into K&TG's "Hollywood Swinging" to show you where the hit came from.

After the group accepted their award (during which none of the members mentioned James "J.T." Taylor, an odd -- possibly shady -- omission) came the pièce de résistance, the much touted mashup of "Ladies Night" and the "Not Tonight (Ladies Night)" remix. Ladies man Eric Benet took on the original with vigor, but of course the main event was Lil Kim taking the stage with the ladies. Angie Martinez was a no-show (and apparently two-thirds of Total were all too available) for the performance, but Kim, Da Brat, Missy Elliott were all on hand to set things off proper-like. Even the late Lisa "Left Eye" Lopes got some shine via a clip from the original video as the femcees shut the stage down and showed that the ladies can still hang with the fellas in the rap game.

All in all, the tribute was a fun time for music lovers and really showed just how timeless the music and talent of Kool & The Gang really is.