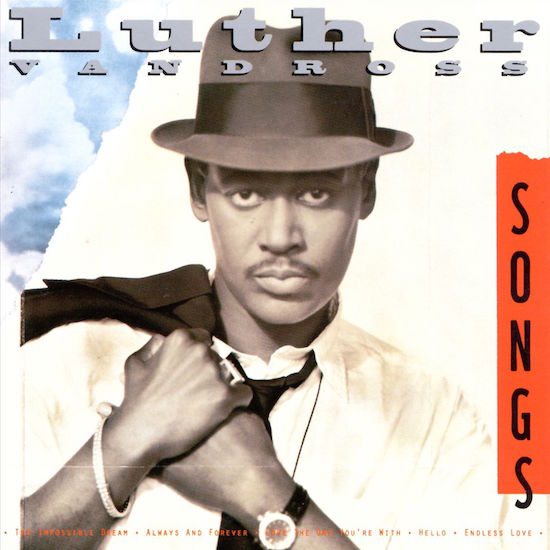 Luther Vandross was proof that sometimes life isn’t fair. We’re not just talking about his tragic death in 2005 at the age of 54, but also his music career. Sure, Luther was much lauded and deserved every ounce of praise he received, for he was — hands down — one of the best male singers in any genre and of any generation because of how he so effortlessly delivered every lyric that he belted. Yet the Pavarotti of Pop was drastically underappreciated, often relegated solely to the world of R&B, which — maybe being unwilling to share the gifts Vandross possessed — worshipped his ability to hang with big-voiced divas such as Aretha Franklin, Dionne Warwick, Patti LaBelle, Whitney Houston and Mariah Carey.

But much has been written about Vandross’ famous frustration at not being able to cross over to a mainstream audience, and it has been said that 1994’s Songs was his most aggressive attempt to do just that. Containing nothing but covers of well-known ’80s hits, Broadway tunes, soul staples and folk-rock classics, Songs was a showcase to prove just how easily he could cage, tame and control his amazing tenor, and maybe make you like his renditions of these nostalgic cuts a little better than the original acts’ efforts.

Perhaps that’s why his take on Lionel Richie’s “Hello” is nearly the same musically and carries the original’s similar notes, so that nuances would not distract from how good his voice was against the former Commodores’ singer who dominated during the ’80s. Maybe this was Luther saying, “I could do that — I deserve to be a superstar, too.”

But aside from vocals, such a gutsy song choice proved Luther could also be provocative. That could explain why, when covering “Killing Me Softly” — originally sang by Lori Lieberman but made famous by Roberta Flack — Luther leaves the lyrics intact, including the male pronouns, and likely messed with the gossip hounds who long questioned his sexual orientation.

The same would not be true of “All the Woman I Need,” originally crooned by Linda Clifford and titled “All the Man I Need,” though a version of the same name from Whitney Houston’s I’m Your Baby Tonight did more to inspire Vandross on his rendition, which follow Nippy’s version quite faithfully.

But then Luther went from minor to major changes and dared to alter some of the standards. He turned Barbra Streisand’s “Evergreen” into an R&B ballad, complete with elongated notes rather than straightly-sung poetry. He transformed Stephen Stills “Love the One You’re With” from folksy settle-down defeatist acceptance speech into a gospel lovefest that borders on bacchanalia. Jackie DeShannon’s “What the World Needs Now is Love” went from sounding like an anthem for a Coca-Cola commercial to becoming a mid-’90s R&B filler track.

And Luther, sacrilegiously, stripped Diana Ross & The Supremes’ “Reflections” and Aretha’s “Since You’ve Been Gone” of their soul, just as he mellowed the message of uplift by diminishing some of the funk in McFadden & Whitehead’s “Ain’t No Stoppin’ Us Now.” So sonically different than their original takes, it’s easy to see why many critics panned the offerings on Songs, though few seemed to appreciate how dulling down these particular tracks displayed how well written they were and their potential to be pop standards despite being labeled as black/race records during their prime. The same could be said of Friends of Distinction’s “Going in Circles,” though Heatwave’s “Always and Forever” remains the beautiful ballad it was meant to be in Vandross’ hands.

Angry soulsters and flower children aside, Luther can be forgiven for what could be interpreted as boasting on Songs, making sometimes bold changes to iconic tunes and having the confidence to back them up with his flawless one-of-a-kind voice. The project changed views of the already much-loved singer and garnered a deeper appreciation and respect for his abilities. And if he set out to achieve crossover success, he almost achieved it by racking up a Billboard Hot 100 No. 2 hit with the Mariah Carey duet “Endless Love,” another Lionel Richie and Diana Ross cover. Though it was his highest charting hit on that tally, the best evidence of Luther’s attempt at mainstream success might be encapsulated within Tony-winner Richard Kiley’s “The Impossible Dream,” from the Broadway show Man of La Mancha and here, the closing number on the set: “This is my quest, to follow that star / No matter how hopeless, no matter how far / To fight for the right, without question or pause / To be willing to march into Hell / For a Heavenly cause.”