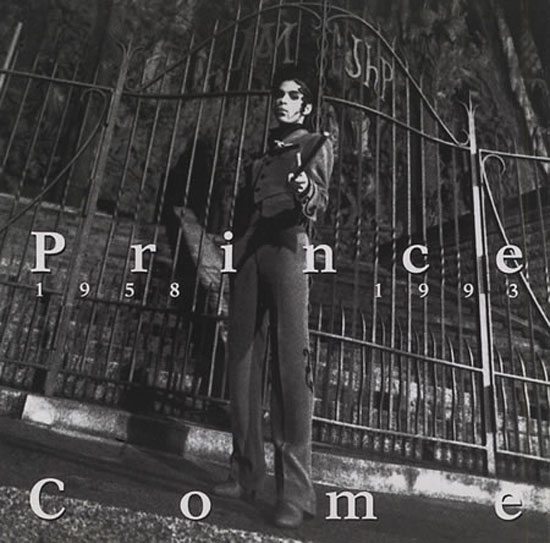 While Prince has accomplished so much, been the subject of many a comedy routine or sketch and inspired almost every artist on our playlists, what often gets overlooked is his dedication to protecting his intellectual property. In 1994, the Purple Rain singer had just changed his name to O(+>.  Fed up with his label, it was the perfect plan to distance himself from Warner Bros. and we can only guess the feeling was mutual. Out of creative spite, Prince strung together an album of unreleased tracks that were sitting in his music vault and submitted them to create his 15th studio album Come. With an ominous album cover, signaling the death of his speakable name, Prince fulfilled his contract and bounced. To add insult to injury, the purple one kept his 1994 hit "The Most Beautiful Girl In the World" to himself and released it on a later album, The Gold Experience, as O(+> in 1995.

Come, an expected album title from Prince, featured enough racy content and orgasmic noises to make the world blush in unison. The title track, which was the highlight of the album, was an overtly sexual menage of horns, funk and soul. Need proof? In the chorus he sang "Can I suck you baby? / Can I f**k you baby?" While pretty literal, his vocals turned the overt questions into finessed one-liners. There are quite a few pimps who probably learned a thing or two from Prince and can thank him for his suggestive pick-up lines.

On Come, Prince wrote every song except "Solo," which features the singer a cappella with only a harp. It's not often you hear Prince this way and it was more than welcome. The rest of the album didn't have much to connect it all together, but we heard Prince exercise his musical right on each track. On "Loose!" Prince got just that. A cacophonous track with all kinds of guitar, synth and a plethora of sound effects, Prince enlisted his band to go off on the track and leave all decorum behind. If you're a therapist, then there's much fodder for analysis on the track "Papa." Just like in his 1984 film Purple Rain, the song, which featured a four-year-old getting punished, suggested that he'd been verbally and physically abused. With little-to-no transition, the album switches gears. We all know Prince is a fan of hip hop and rap, and he made sure to drop a few bars on "Race" to create a New Jack Swing party. It turns out the only singles that made it to the charts were "Letitgo" and "Space."  "Letitgo," one of the newly composed tracks, which served all kinds of attitude, peaked at No. 31 on the Hot 100 and No. 10 on R&B/Hip-Hop. "Space," which had Prince telling us how high he'd take his lover, reached No. 71 on the R&B/Hip-Hop charts because of single sales.

Prince's future wife Mayte Garcia along with Kathleen Bradford provided background vocals. In case you were wondering, Vanity, his partner at the time, provided all of the orgasms featured on the album. There has to be a certain level of skill associated with providing this type of audio, we're guessing. Naturally after a 45-minute session with Prince you should probably expect to "Orgasm," hence the title of the final track, which certainly isn't a song but a finale if you will. Playing a few guitar riffs and muttering "keep going," Vanity provided her best orgasmic vocals in the background. He ended the audio with "I love you," which after an orgasm like that, we can assume is Prince's way of giving her an 'A' for effort.

Although Come wasn't his brightest moment in his musical repertoire, he never meant for it to be. Prince taught us that despite being met with kicking and screaming, it is in fact possible to redefine yourself as an artist and at any point in your career. What matters is that your fans still dig your music and ride along on your musical spaceship to whatever destination you choose to take them. Two decades later in 2014, Prince has had some highs and even more highs. From making amends with Warner Bros to celebrate the 30th anniversary of Purple Rain, and making us breakfast in bed, to rebranding himself with his near-perfect afro and releasing new material with his trio 3RDEYEGIRL, he's unstoppable. Staying true to his beliefs, he still brandishes his purple wand to make musical magic, and he's going to make you love it whether you like or not.