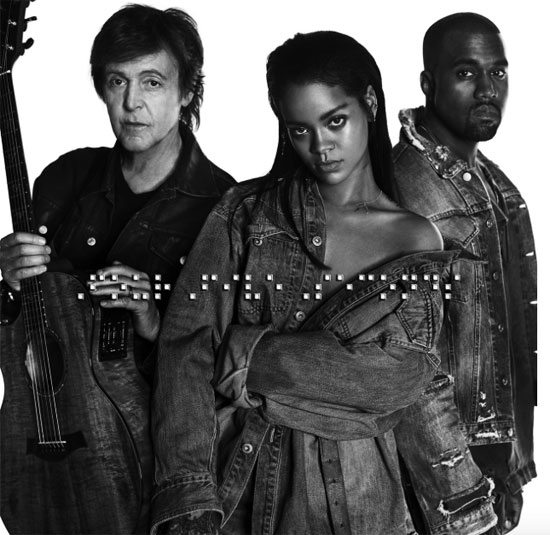 Rihanna, Sir Paul McCartney and Kanye West are giving us something a little different with their new collaboration, "FourFiveSeconds." Rihanna surprised us with the single this weekend, which is a country-inspired pop ditty with Sir Paul on acoustic guitar duty and Kanye lending his singing chops. It's a different sound for RiRi, who hasn't released new music since her 2012 album Unapologetic. The soft acoustic track could easily be the new anthem for 9-to-5'ers who can't stand their cubicles or for folks who can't wait for the weekend. In her best country twang Rihanna sings, "I'm four five seconds from wildin' / And we got three more days 'til Friday / Just trying to make it back home by Monday, morning / And I swear I wish someone would dare me / Ooh that's all I want." On the percussion-less single both Rihanna and Kanye sing about their unpredictable tempers, yet the actual tone of the track suggests they're pretty even-keeled.

We're definitely here for the unexpected collaborations, Kanye recently worked with Sir Paul on his latest single "Only One," a sentimental tribute to his mother. Thankfully we'll get to hear more from these two since Sir Paul teams up with Kanye again for the rapper's upcoming album. It looks like this country/pop single will be on both Rihanna and Kanye's new albums but before they release their respective projects, you can listen to the track another "fourfive" times by purchasing "FourFiveSeconds" on iTunes. Let us know if you're into what the trio is giving us or if you want to return to sender.


TAGS:  audio, kanye west, paul mccartney, rihanna
Previous: SoulBounce Exclusive: The Reasn Lights Our Fire With His ‘Blue Flame’ Next: Lucian x Mickey Valen Get Our Attention With Their Remix Of Seinabo Sey’s ‘Pistols At Dawn’