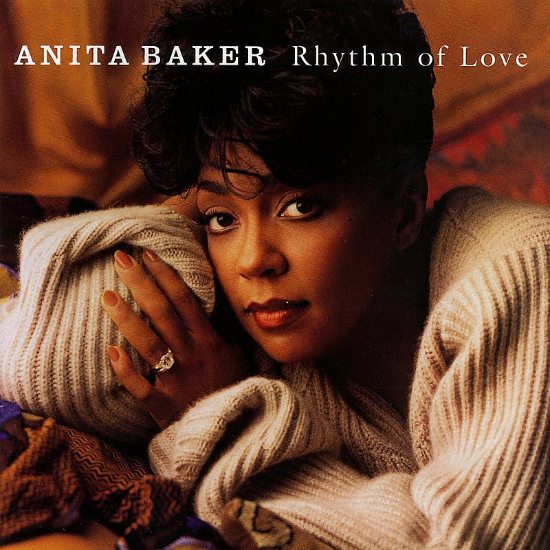 If there was such a title as the Queen of the Quiet Storm, then that honor would surely go to Anita Baker. Since her solo debut in 1983 with The Songstress, music lovers and radio immediately latched onto and loved the understated R&B diva. Whereas Whitney Houston and Mariah Carey were groomed to become larger than life pop stars, Baker's crossover success was more organic. Much like Sade, her music was a mélange of R&B, soul and jazz packaged together and gift wrapped with her unique voice. The fact that people dug her music outside of those core genres was just a testament to her artistry and brilliance, all of which was on full display on her 1994 release, Rhythm of Love.

The album Rhythm of Love became Baker's fifth studio release and second of the 1990s following Compositions, which kicked the decade off. The four-year gap between albums didn't dull Anita's shine, with Rhythm of Love hitting No. 1 and No. 2 on Billboard's Top R&B/Hip Hop and Hot 200 album charts, respectively. The album was a bona fide hit out of the box and went on to be certified double platinum, thereby adding some more platinum plaques to her walls.

Its commercial success aside, Rhythm of Love was significant in that it found Anita Baker not only flexing her vocal muscles but also taking over as executive producer for the first time. That was no short order, but Baker stepped up and showed out, delivering another album that fit perfectly into her existing catalog. On the one hand, that playing it safe worked with familiar sounds coloring Rhythm of Love, but criticisms were levied against the set because Anita didn't take any risks. Here again, much like Sade, when it came to her sound, it wasn't broke, so there was no need to fix it.

Baker fans were nonetheless enthralled with the first single, the piano-driven "Body and Soul." Anita sang about loving and being loved completely, truly, madly and deeply. Her vocal performance was flawless and she looked it as well, turning her sexy on for the song's music video. The listening public ate it up and pushed "Body and Soul" into the top 40 of the Hot 100 and planted it firmly in the top five on the Hot R&B Singles chart.

Rhythm of Love's next single, "I Apologize," also made a splash on the charts and with Baker lovers. Anita made saying "sorry" sound oh so good and became the go-to song for someone to play when they messed up in their relationship and needed to do some damage control. "I Apologize" was good enough to win her a GRAMMY for Best Female R&B Vocal Performance in 1996.

The highlights didn't end with the first two singles. "It's Been You," "You Belong To Me," "Wrong Man" and "Only For A While" were all standouts. Jazz standards "The Look of Love" and "My Funny Valentine" added a jazzier note to the collection but with Anita putting her husky-voiced stamp all over them.

Anita Baker's Rhythm of Love would be her last album of the 1990s, with the singer not releasing another project until a decade later in 2004. Since that time, she dropped a Christmas album in 2005, but we're once again coming up on a 10-year gap between albums, although there's long been talk that a new collection of music is on the way. Fans got a glimmer of hope in 2012 when she released the single "Lately," a Tyrese cover that went on to be nominated for a GRAMMY, but, alas, the impatient wait continues. On the bright side, Anita's Rhythm of Love doesn't sound the least bit dated 20 years later, so we'll continue to spin this like it's 1994.