Angie Fisher Takes Her Issues With The ‘I.R.S.’ To The 57th Annual GRAMMY Awards 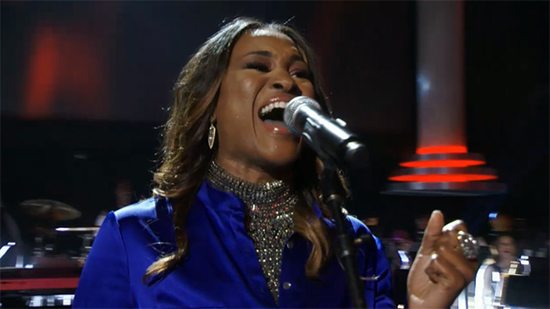 As I’m sure you know by now, this year’s GRAMMY Awards telecast came and went over the past weekend. With its highs, lows and seemingly endless string of performances, the 57th year of the event took a beating and received its lowest ratings in six years. Unfortunately one of the strongest performances of the night was overlooked and only witnessed by viewers who went out of their way to catch the online pre-telecast Premiere Ceremony on GRAMMY.com. Just before the winners of R&B categories were announced, our girl and Hidden Beach Recordings artist Angie Fisher took to the stage and squalled her way through her GRAMMY-nominated single “I.R.S.” We’ve already spent months fawning over this song, Fisher’s breathtaking vocals and B. Slade’s unparalleled songwriting, but watching Fisher strut onto this stage in her form fitting blue gown and sing like a mad woman in front of the music industry’s elite certainly made us smile even harder.

While Robert Glasper went home with the GRAMMY for Best Traditional R&B Performance with the help of the Robert Glasper Experiment, Lalah Hathaway and Malcolm-Jamal Warner for their rendition of Stevie Wonder's "Jesus Children of America," Fisher and Slade still walked away winners as this performance of “I.R.S” shined a little bit brighter than much of what we all saw on the main stage later that night. If you’re late to the party, you can head over to iTunes and grab your own copy of Angie Fisher’s GRAMMY-nominated debut single “I.R.S” now.