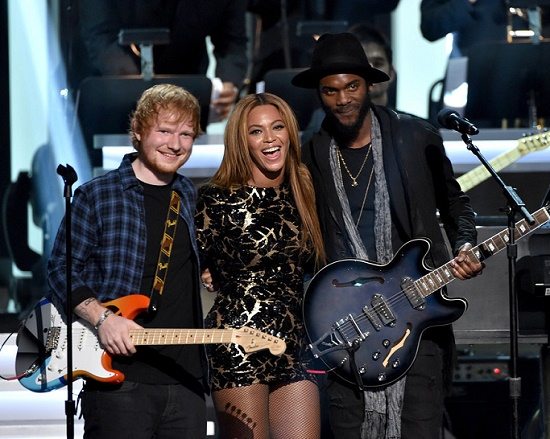 Last night, a galaxy of musical stars paraded across our TV screens to pay tribute to the living legend that is Stevie Wonder. The special, Stevie Wonder: Songs in the Key of Life — An All-Star GRAMMY Salute, found all the high-wattage star power from stars like Janelle Monáe, Ne-Yo, Jill Scott, India.Arie and even Stevie's own daughter Aisha Morris paying musical tribute to Stevie's enormous talent and contribution to American music. And, of course, no tribute can happen these days without an appearance from pop's and R&B's current reigning queen, Beyoncé.

The multiple GRAMMY winner kicked the celebration off by sauntering down the aisle before taking the stage for an energetic interpretation of Stevie's "Fingertips." While Bey's heart and voice were definitely in the right place, her penchant to do the most was in full effect during the performance, with Bey and a few dancers moving all over the stage. When Ed Sheeran joined her for Hotter Than July's "Master Blaster (Jammin')," she was still a bit too turned up, but luckily was balanced by Ed's more measured take on the usually laid-back, reggae-influenced number. But it was on oft-covered Stevie classic "Higher Ground," where blues singer Gary Clark Jr. joined the two on stage, that Bey really went into overdrive. As they each took a turn on the verses, Bey proceeded to oddly grind and thrash around as if she was getting every single bit of her entire life at that moment.

It was a rather inspired performance, but one that the man of the hour seemed to love all the same. Take a peek at what Bey brought to the party right here.